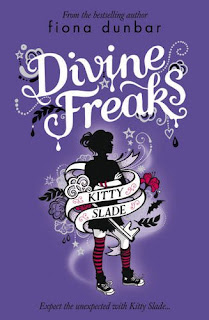 From Amazon:  "Hey, I'm Kitty Slade. Just your average, normal girl, doing, you know, normal stuff. Got a brother (annoying), a sister (quite annoying) and a grandma (she's awesome).
Oh yeah, and one more thing. I can see dead people."

When a ghost turns up in her biology classroom, only one thing's for sure - Kitty Slade's life is about to get freaky...

This is the first book I have read by Fiona Dunbar and I really enjoyed her writing style.  It's witty and fun - making the book a joy to read.

The story follows Kitty and her new found talent of seeing ghosts.  Unfortunately the first one she sees is during her biology class!  Kind of freaky and somewhat embarrassing since she is the only on who could see him.  Also he won't leave her alone.  It seems he has unfinished business and wants Kitty to help him....

I loved Kitty.  She is very strong minded, which gets her into a tad of trouble, but she's also funny and sweet.  I also really liked Sam and Flossie - and really enjoyed that the 'scooby gang' were her brother and sister.  There was some really great interaction between all three and I love the way they annoy each other!

The mystery aspect is fun and well plotted.  There are snippets of information and clues that have them trying to solve what happened/is happening.  Some things happened a little too easily despite the characters putting themselves in potentially dangerous situations - but since this is aimed more at a tween audience I guess that is somewhat expected.  I did really like the ending and think it sets up the rest of the series.  The opportunities for many more stories feels unlimited and I'm interested to see what what Kitty faces next!

A promising start to what I'm sure will be a fun series!  I'm looking forward to Fire and Roses when it's published later in the year.

saw this in your shop today does look really pretty too.