The Medusa Project: The Set Up by Sophie McKenzie 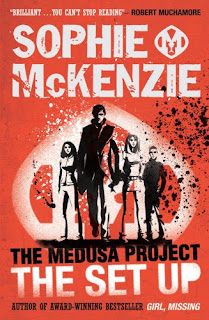 From Goodreads: Fourteen years ago, scientist William Fox implanted four babies with the Medusa gene - a gene for psychic abilities. But Fox died and the babies were hidden away for years.
Now they're teenagers - and unaware that their psychic powers are about to kick in.

Cocky, charismatic Nico thinks his emerging telekinetic abilities will bring him money, power and the girl of his dreams. He's about to find out just how wrong he is...

Another Sophie Mckenzie book that I really enjoyed!  I really like her writing style and find her stories are always great fun to read.

This story focuses on Nico.  It turns out that he was one of four babies who were given the Medusa gene - a gene for psychic abilities.  Once his kicks in he thinks he can use them to impress the girl he really likes.  But it turns out not all is what it seems....

I liked Nico.  He is a tad cocky but he is also likeable.  A bit gullible perhaps but overall I really warmed to him  I also really liked Ketty - I think I liked her the best.  I also liked the relationship between her and Nico.  Dylan and Ed took a bit longer to warm to but I believe each story will be told from each of the character's point of view so that will help bring them more into focus.

I loved all the different psychic abilities.  I always love stories focused on this subject so I had a good feeling I would enjoy this.  Although the plot was a bit predictable at times it didn't spoil the fun at all!  All the action scenes are great - the story fast paced -  this one really sets up the series.  I can't wait to get stuck into the next one.

Email ThisBlogThis!Share to TwitterShare to FacebookShare to Pinterest
Labels: 4 Stars, Reviews, Sophie McKenzie, The Medusa Project, The Set Up

I loved this book too! Sophie is amazing.

Great review. I've not read anything by Sophie McKenzie, but this makes me want to!

I have this series on my shelf to read, I didn't know each of the characters gets their own book to tell their stories. I quite like when that happens..