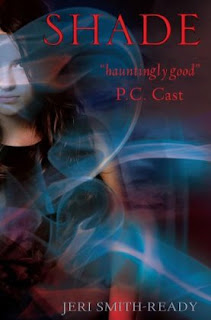 From Goodreads: Best. Birthday. Ever. At least, it was supposed to be. With Logan's band playing a critical gig and Aura's plans for an intimate after-party, Aura knows it will be the most memorable night of her boyfriend's life. She never thought it would be his last.

Like everyone born after the Shift, Aura can see and hear ghosts. This mysterious ability has always been annoying, and Aura had wanted nothing more than to figure out why the Shift happened so she can undo it. But not with Logan's violet-hued spirit still hanging around. Because dead Logan is almost as real as ever. Almost.

It doesn't help that Aura's new friend Zachary is so understanding--and so very alive. His support means more to Aura than she cares to admit.

As Aura's relationships with the dead and the living grow ever complicated, so do her feelings for Logan and Zachary. Each holds a piece of Aura's heart...and clues to the secret of the Shift.

I really, really enjoyed this one!

Along with everyone born after the Shift, Aura is able to see and hear ghosts. Not an ability she particularly enjoys. She wants to find out what caused the Shift to see if she can change it. But when her boyfriend suddenly dies she is devastated. But since she can see and hear ghosts she still has Logan in her life. And things only get more complicated Especially when new boy Zachary comes into the picture...

Aura is a great character. I really liked her and enjoyed her narration. Logan is fun and I could see why Aura would be with him. But he does have a bit of an annoying side and sometimes comes across as selfish. I really liked Zach, and I loved that he was Scottish! I could really imagine that accent! He seemed sweet and I thought him and Aura had a lot in common. Perhaps more than her and Logan.

The aftermath of Logan's death was handled really well - the way the characters who could see him grieved in a different way from those who couldn't - felt very realistic. I found this gave the book an emotional grounding which really appealed to me.

I also really liked the idea behind the Shift. There is a mystery to it - one that we discover pieces of alongside Aura. I'm looking forward to unravelling more of the puzzle in future installments of the series. I'm glad I have my copy of Shift to hand because with that ending? I so need to read it right now!

Lovely review Sammee! Aura does sound like a lovely character! Can't wait to see what I think of her myself. I'm waiting for my copy of Shade to arrive in the post. Ordered it a week ago (but it still hasn't come...). I suppose I should be thankful I am getting it at nearly half the price I would have to pay, had they brought this book to my local bookshop.

Hope you enjoy Shift too! I'm probably going to have to wait for the PB edition to come out!

This sounds really good and interesting! Thanks for the review!

I've added this one to my 'Wishlist'! It look so good.
Brilliant review!

Ooh, this was one of my favourite books of 2010. And I began thinking it'd be just another paranormal as well..