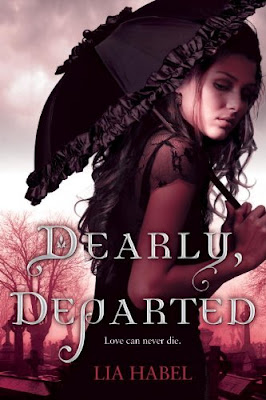 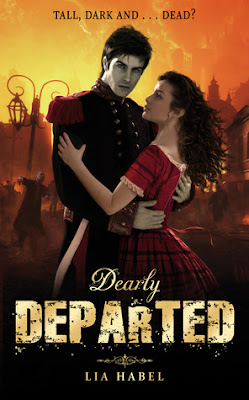 What do you think?

The UK covers makes it obvious it is about zombies whereas the US on gives it a more Gothic feel. I kind of really like both but I think the US one is my favourite as it's pretty! The UK one has a more fun feel though and I love the font they use for the title - it will be interesting to see which cover best matches the tone of the book once I've read it.

From Goodreads: As far as romantic pairings go in the year 2195, you don't get much more unlikely than an upper-class schoolgirl and a poor miner from enemy tribes. Filter in the fact that he's a zombie, and you're definitely talking about star-crossed love.

Dearly, Departed is a cyber-Victorian/steampunk romance that takes place in the shadow of a new ice age. Nora Dearly, a mouthy teenage girl and apparent orphan, leaves school for Christmas - only to be dragged into the night by the living dead. Luckily for her, though, the good ones got to her first. From her reanimated rescuers she learns not only that zombies are roaming the countryside, but that her father is one - and that he's in terrible trouble. She also meets Captain Bram Griswold, a noble, strong, and rather sweet undead boy for whom she starts to fall.

Meanwhile, her best friend, Pamela Roe, is just trying to carry on with life as best she can in the wake of Nora's disappearance - when she ends up killing an evil zombie in self-defense. Pam is galvanized into action, and ends up leading a group of survivors as the city of New London is thronged by the ravenous dead.

Upon hearing of Pamela's plight, Nora and Bram set out to rescue her friends, find her missing father, and maybe just save what's left of the world.

This does sound ace! I much prefer the US one, I don't like the UK one at all.

While the US is cool, I think I prefer the UK one.

I prefer the US cover.