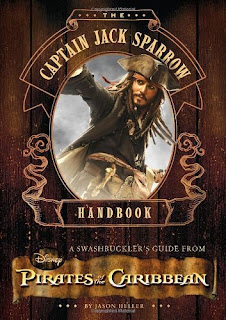 From Goodreads: He’s the most popular pirate in motion picture history—and now The Captain Jack Sparrow Handbook offers his fans an insider’s guide to all the dirty tricks of the buccaneer’s trade! Complete with step-by-step instructions, helpful diagrams, and full-color photography from the Pirates of the Caribbean films, this nautical treasure trove arrrrrrrrrrrticulates such vital and colorful information as:

• How to Sail a Ship
• How to Survive Being Marooned
• How to Break a Curse
• How to Fight Six Angry Men in a Tavern
• How to Recruit a Crew
• How to Cope with Mermaids
• And much, much more!

Arriving just in time for Captain Jack’s long-awaited return in the blockbuster Pirates of the Caribbean: On Stranger Tides, this fiendishly adventurous handbook is essential reading for pirate lovers, Johnny Depp fans, and all-around rogues and rapscallions of all ages.

This is great fun and written in the same style of humour we have come to expect from the films.  It's a book that you can either fully immerse yourself in or one you can dip into at your leisure.  I, however, was most upset that I failed at being a potential Pirate at the first hurdle since I can't swim (which, yes,  I am aware is kind of obvious but never mind!).

The book covers everything you need to be a pirate and will delight anyone wishing they could be one. It looks at how to become a pirate, how to recognise a pirate (follow your nose apparently!), all the possible maritime skills you may need, people skills (with an interesting chapter on disguising your gender), acquiring booty (ooh treasure!), all the mysteries of the deep (eek sea monsters!) and on how to cheat death (very important!)

There are some fun references to the characters in the films and it also has pictures from the movies including a few of a certain Captain Jack Sparrow (aka Johnny Depp) which are very easy on the eye!  Great fun -  I need to go watch the movies again now!

I'm not sure that this would be one for me, but great review!

if i was a kid, i would love this (in fact i think my boyfriend would probe love it!)