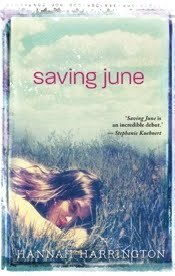 From Goodreads: ‘If she’d waited less than two weeks, she’d be June who died in June. But I guess my sister didn’t consider that.’

Harper Scott’s older sister has always been the perfect one so when June takes her own life a week before her high school graduation, sixteen-year-old Harper is devastated. Everyone’s sorry, but no one can explain why.

When her divorcing parents decide to split her sister’s ashes into his-and-her urns, Harper takes matters into her own hands. She’ll steal the ashes and drive cross-country with her best friend, Laney, to the one place June always dreamed of going California.

Enter Jake Tolan. He’s a boy with a bad attitude, a classic-rock obsession and nothing in common with Harper’s sister. But Jake had a connection with June, and when he insists on joining them, Harper’s just desperate enough to let him. With his alternately charming and infuriating demeanour and his belief that music can see you through anything, he might be exactly what she needs.

Except June wasn’t the only one hiding something. Jake’s keeping a secret that has the power to turn Harper’s life upside down again.


This is one of the books listed on the Contemps Challenge and I've looking forward to it for ages. It sounds great!

Email ThisBlogThis!Share to TwitterShare to FacebookShare to Pinterest
Labels: Hannah Harrington, I want to read that..., Saving June

You're right! It does sound great! I assume it's going to be a road-trip book and I don't think I've read any of those. Thanks for letting us now about it!

Wow, this looks great! It's on my Waiting list! :)