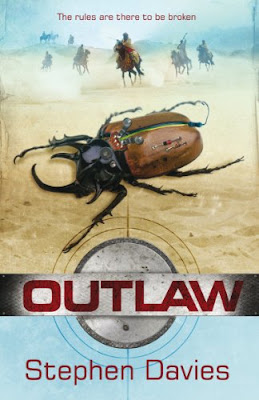 As part of the Blog Tour for his new book Outlaw, Steve kindly agreed to guest post on I Want To Read That. So, without further ado I shall hand you over...
----

Not long ago I was in Djibo market watching a dabaranke (magic man) perform. Djibo is a dusty desert town in the north of Burkina Faso, which has been my home these last ten years.

The dabaranke was surrounded by a large crowd, and he was busying himself with doubling their money. He took five hundred African francs, waved it around and handed back a thousand. He took five thousand, blew on it and handed back ten thousand. Cries of 'Allahu Akbar' (God is great) rose from the crowd. They pressed in, eager to hand over their own coins and notes.

Some of the money was doubled, but some of it disappeared into thin air - whenever money disappeared the dabaranke would point an accusing finger at the hapless punter and exclaim, 'Your soul is not strong enough!'

I have met countless warm-hearted, witty and wise people in Burkina Faso over the years. But I have also met my fair share of cynical dabarankes, unjust gendarmes, fake sheikhs, merciless mayors, corrupt councillors and manipulative merchants. Injustice, corruption and exploitation are widespread – and it goes right to the top.

Last month, with revolution already crackling in the African air, Burkinabè men and women decided that enough was enough.

It started when a schoolboy in the south of Burkina Faso was beaten by a policeman and died of his injuries. Students all around the country took to the streets yelling 'Justice! Justice!' Others joined them. A few days later the military joined in, not to suppress the protests but to express their own discontent about unpaid housing allowances. They raided an armoury, got drunk and ransacked the city, shooting into the air, stealing 4x4 vehicles and looting mobile phone shops. What started as a student movement was suddenly a terrifying crime spree.

While all this was going on, my new book, Outlaw, was being printed. And the questions it asks seem all the more pertinent in the light of recent events. Like this: how do you resist injustice without resorting to violence?

Outlaw is set in Burkina Faso and its main character, the Chameleon, is a literary descendent of Robin Hood, The Scarlet Pimpernel, Zorro and {insert-your-own-favourite righter-of-wrongs here}. Here is a sneak preview of Chapter 2: Chameleon meets dabaranke.

The Chameleon stood in the shadows near the back of the crowd. He was eighteen years old and he wore a black cloak with a deep hood. He watched and listened as Sheikh Ahmed Abdullai Keita performed.

The sheikh’s reputation had preceded him. All along the edge of the Sahara Desert, people spoke in awed whispers about the miracle man on the white stallion. Now he had arrived in the border town Mondoro, in the south of Mali, and he was doing what he did best. Miracles.

The sheikh sat on a straw mat in front of the chief ’s hut. He wore purple robes and a white prayer hat embroidered with sequins. Two plaited locks of hair hung down on either side of his face. He had a short
pointed beard.

Ranged in a semicircle around the sheikh stood the villagers, their cheeks slack with wonder. In the last two hours the sheikh had sucked the malaria out of a sick man, made dozens of cola nuts disappear and conjured a disembodied floating head out of thin air. Now he got up and ran through the crowd towards his magnificent stallion. ‘Behold!’ he cried. ‘The djinns of the air are coming to bear me aloft on their warm invisible hands.’

With his hands stretched out on either side the sheikh lifted off the ground and hung there about two feet off the ground. The crowd behind him gasped. There was nervous laughter and cries of ‘Allahu akbar!’ – ‘God is great!’ Some cupped hands over their faces in pious supplication.

At the back of the crowd, the Chameleon narrowed his eyes and drew his cloak around him more tightly. It’s an illusion, he thought to himself. But how does he do it?

The sheikh rose a little further in the air and put his left foot into the nearside stirrup. Then he swung his right leg over the horse’s back, sat down gently and straightened his robe.

‘Allahu akbar!’ The cries rose on the night air.

The sheikh shook his head from side to side so that his locks swung like pendulums. Then he began to laugh – a deep, resonant laugh.

‘The djinns of the desert mock you,’ he said. ‘You think you prosper, but tragedy is near.’

‘What tragedy?’ The question rippled through the crowd.

‘You look at the sky and grin and you say to each other: in a few short weeks the rains will begin and we will sow our seed. Not so, fools! The djinns have hatched a plan. They will withhold the rain you long for. Not a drop of water will fall on Mondoro. Not a single stalk of millet will grow under the sun. Not a single peanut will form in the ground. From every eye, salt water will flow.’

‘Is there nothing we can do?’ asked one man. ‘Perhaps if we give the djinns more cola nuts –’

‘Senegal is hundreds of miles away!’ cried another.

‘I will take pity on you,’ said the sheikh. ‘Have the animals ready by sunrise tomorrow. I will take them to Senegal and perform the sacrifice myself.’

That night the women of Mondoro wept bitterly. Sheikh Ahmed has demanded almost all the animals in the village, they said. What will be left for our children and our children’s children? A handful of old, sick goats and nothing more.

The men were adamant. We are lucky, they said, that the sheikh warned us of the djinns’ intention. It will hurt us to pay what the djinns demand, but we have no choice. We cannot risk a whole year’s harvest. There is no such thing as an easy sacrifice.

The men got their way, and the next morning Sheikh Ahmed Abdullai Keita went on his way with fifty sheep and fifty goats. As soon as he was out of sight of the villagers, he entrusted the animals to one of his servants, ordering him to take the animals to a faraway market and sell them for hard cash.

Crouching behind a nearby acacia bush, the Chameleon observed the whole exchange. He tutted quietly and swore that he would teach this charlatan a lesson.