A random thought and question...

I was thinking the other day (dangerous I know!) about all the books I'd love to become a film or TV series. I decided I'd love to see Life As We Knew It, The Mortal Instrument series & Shiver as movies and the Mediator books as a TV series - then I got to thinking about all the films or TV shows that could make a good book series.
One stuck out for me.
Veronica Mars! 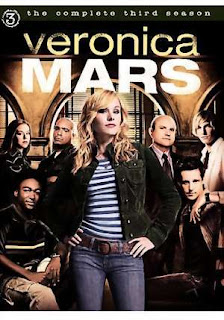 From tv.com: In the wealthy, seaside community of Neptune, California, the rich and powerful make the rules. Unfortunately for them, there's Veronica Mars, a smart, fearless 17-year-old apprentice private investigator dedicated to solving the town's toughest mysteries. Veronica used to be one of the popular girls, but it all came crumbling down around her after her best friend, Lilly, was murdered, and her then-sheriff father, Keith, was removed from office for naming Lilly's rich father as the lead suspect. During the day, Veronica must negotiate high school like any average teenage girl. But at night, she helps with her father's struggling, new private investigator business--and what she finds may tear the town of Neptune apart at the seams
I loved that show - then they cancelled it. I got myself over excited earlier this year when it looked like they would make a film - but no! Apparently it's not to be. But the Creator Rob Thomas is a published author (Rats Saw God - which I have but haven't read yet) so don't you think a series of books would be good? Then I could finally have some closure - or just some more LoVe! Whichever.
However, seeing as this is rather unlikely - can anyone recommend any Young Adult Crime/mystery novels along similar lines?
Posted by I Want To Read That at 19:22

Email ThisBlogThis!Share to TwitterShare to FacebookShare to Pinterest
Labels: A random thought and question...

I've heard such great things about this series. I need to check it out.

Vmars is amazing! I am STILL mad about no movie esp since Rob & Kristen were signed on to do it!

I started writing something like vmars once, but it was TOO close... so I stopped. Would def be interesting, I'd love to read a book like that with the mystery but all the comedy! Would be amazing given the right writer!

This is my first visit here, but I will be back soon, because I really like the way you are writing, it is so simple and honest