Being Nikki by Meg Cabot 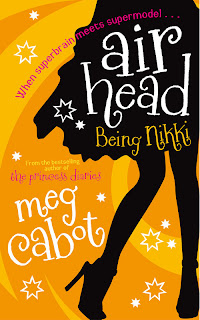 From Amazon: Things aren't pretty for Emerson Watts.
Em was sure there couldn't be anything worse than being a brainiac the body of a teenaged supermodel.
But it turned out she was wrong. Because that supermodel could turn out to have a mother who's gone mysteriously missing, a brother who's shown up on her doorstep demanding answers, a former best friend who's intent on destroying Stark Enterprises to avenge the death of his lost love, and a British heartthrob who's written a song about her that's topping the charts.
How can Em balance all that with school, runway shows, and weekend jaunts to St. Johns - especially when she's got ex-boyfriends crawling out of the woodwork who want more than just a photo op; a sister who is headed to the high school cheerleading championships; a company she represents that seems to be turning to the dark side...
Not to mention trying to convince the love of her life that models aren't really airheads after all...especially one model in particular.
But then, nobody said it was going to be easy being Nikki.

I am really enjoying this series. We get to watch Em try to adapt to her new life and try to keep her old one – and at the same time try to work out exactly what Stark is up to. Very interesting and being a Meg Cabot book there is a lot of fun along the way. Granted it’s not the most realistic of plots but that really doesn’t matter as it's so enjoyable. I don’t want to give too much away but I’m really looking forward to the next book Runaway as we may finally get to know the big secret! (see Meg’s blog here) And (more importantly) I have to know if she will finally end up with Christopher.

I love this series! I'm so looking forward to Runaway. Thanks for the great review!

I want her Em and Christopher to get together so badly! He's so lovely!

I read this one recently! And i loooooved it so much. I can't wait to read Runaway :)