The Secret Life of Sparrow Delaney by Suzanne Harper 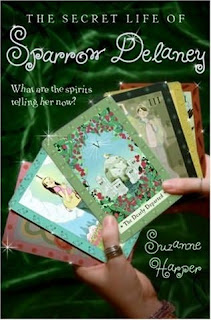 From Goodreads:
In high school, the last thing you want is for people to think you talk to ghosts. When Sparrow begins tenth grade at a huge new school full of strangers, she thinks her dreams of anonymity and a fresh start are finally coming true. No more following in her six older sisters' footsteps. No more going to class with kids who've seen her grandma doing jujitsu in the front yard next to the headstones of her four dead husbands. And no more worrying about keeping her deep, dark secret hidden.Sparrow makes a new best friend and has her eye on an irritatingly appealing guy in her history class. She feels like she's well on her way to a normal life. But it's another boy—a dead one—who wants Sparrow's attention, and he won't let her be till she's helped him Move On.You see, Sparrow Delaney's secret is that she's a psychic. And there's one very persistent ghost who won't let her forget it.

I really liked the premise of this and overall I enjoyed the book - I just found it took until about a third of the way through before it picked up momentum. I’m glad I persevered with it though because once it caught my attention I was hooked.
Sparrow had a really good voice – very humorous – and I could understand her wish to be ‘normal’ and her fear that if people learnt the truth they wouldn’t accept her. Her family was really quirky (especially her grandma) and they added to the fun and wit of the novel. I really liked Luke and Jack as well as Sparrow’s 'spirit guides' – Luke’s story was handled with care by the author and you really felt for his family.
Overall it was good and kind of reminded me of Meg Cabot’s Mediator series. The ending was really sweet and despite the slow start I was left wanting more – I’d like to see more of Sparrow Delaney.

Thanks for the great review! I think I'd enjoy this and I'll look out for it.

Excellent review! I have to check this out. Thank you.

Not heard of this one before. I kind of get freaked out with the whole tarot card or seance type of thing but this one doesn't sound scary so maybe I'll give it a go. I like the title a lot. Great review.

Nice review. I've yet to read this, but I hope to eventually.