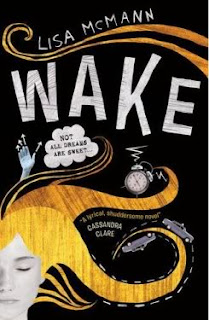 From Amazon: For seventeen-year-old Janie, getting sucked into other people's dreams at any given moment is getting tired. Especially the falling dreams, and the standing-in-front-of-the-class-naked ones. But then there are the nightmares, the ones that chill her to the bone...like the one where she is in a strange house...in a dirty kitchen...and a sinister monster that edges ever closer. This is the nightmare that she keeps falling into, the one where, for the first time, Janie is more than a witness to someone else's twisted psyche. She is a participant...

I was really intrigued by this. I really liked the idea behind it, had read some great reviews so was really excited to read it. The writing style threw me somewhat - I usually prefer first person narrative so to read a narrative in the third person and present tense was a bit weird - but I soon became so engrossed in the story I didn't care. In fact I really liked after a while and think it helps 'Wake' stand out as something different.

While I liked the whole dreamcatching premise - it was an interesting idea and felt really original - I have to be honest and say the main hook for me was the relationship between Janie and Cabel. I loved both characters - Cabel was really sweet and caring, Janie really likeable with great inner strength - and I really enjoyed seeing their relationship progress. I still smile when I think about the skateboard ride:)

There seemed to be a lot going on for such a quick read - which was good - and I was surprised by how dark it was - there are some very adult themes in the book including abuse and alcoholism - but I thought they were handled well.

Overall, this was a great start to the series and I look forward to spending more time with Janie and Cabel.

Great review! I love books where the main hook is the relationship. This sounds really good.

I enjoyed this, but it just didn't live up the hype for me. Though I did love Janie and cabel's relationship!

Great review! I really enjoyed this book! I ws't so much into Cabel and Janie's relationship. Cabel was awesome when he wasn't expressing his feelings, in my opinion - it didn't feel real to me. I liked the book overall, though, it was great! I'm linking to your review from mine! :)

Loved this story, and Fade is awesome as well - I cant wait for the 3rd. I also loved the relationship, the characters were really awesome. Great review!

Hmmm...interesting, I'm the only commenter who hasn't read it. I prefer third person narrative so maybe I will enjoy it. Present tense is really unusual, isn't it?
I will definitely give this a try. Great review.

I haven't read the second book yet but I hope there's more explanation of the mother and her alcoholsim. It was handled well in this book but it just skimmed the surface I thought. Great review. I really enjoyed this book.

Nice review! I really hope you enjoy Fade - it's a great book/series!