This week I got the following books:
(all descriptions from Amazon)

Split by a Kiss by luisa Plaja
Jo has just moved to America with her mum. She's always been a fairly average girl - not a nerd but certainly never one of the popular kids. But on her first day in her new school, she seems to be adopted by the It girls - and is invited to one of their parties. There, she meets Jake Matthews, officially the hottest boy in school, and when they begin to play the kissing-in-the-closet game, Seven Minutes in Heaven, amazingly Jake picks Jo join him in the closet! She can't believe her luck. But the reality of being kissed and groped by Jake is not quite as great as the fantasy...Jo has a choice to make: should she carry on, kiss Jake and secure her position in the It crowd - or should she tell him where to get off and risk relegation back to the land of the ordinary ...? At this moment - Jo splits. She's Josie the Cool - girlfriend of Jake, member of the It crowd. She's also Jo the Nerd - rejected by the It crowd, single ...Will her two halves ever come back together again? Is Jake the guy she's meant to be with or could some of the other people she meets along her journey - Rachel the scary goth, David the misfit or Albie the rocker - be the answer? A fabulously inventive, heartwarming and funny take on the Sliding Doors idea, for teen readers.

Extreme Kissing by Luisa Plaja
Carlota and Bethany are best friends. Bethany is the sensible one with a long-term boyfriend, Carlota is the crazy one with a wild past and rebellious nature. All is fine in their world - apart from Carlota hating her stepdad and longing for a old flame. And apart from Bethany thinking her boyfriend is about to dump her and that her period is late...Carlota comes up with a plan to put all their troubles behind them and go on a girls-only wild day out, with only their favourite magazine to guide them through the day. If they open it on a fashion page they have to get hold of a fabulous new outfit and pretend to be models. If they open it to a page on snogging, they have to find a boy to snog. The magazine will take them everywhere they need to go - but will it help them to reveal the secrets they are keeping from each other?

Many thanks to Luisa for sending me these:)

Deadly Little Secret by Laurie Faria Stolarz
From the bestselling author of the Blue is for Nightmares series (Llewellyn Publications) comes a chilling new paranormal romance series for teens. Until three months ago, everything in 16-year-old Camelia's life had been fairly ordinary. But when Ben joins her school, everything begins to change. Rumoured to be responsible for his ex-girlfriend's accidental death, Ben is immediately ostracised by everyone except for Camelia. Inexplicably, she is drawn to him - but soon she begins receiving eeries phone calls and threatening notes. Can Ben be trusted?

Good Ghouls Do by Julie Kenner
As the vampire population at Waterloo High continues to grow, Beth Frasier realises that she has to save not only her school, but also her home town. And only one thing is for sure - she has to find the head vampire and kill him. Her only problem? With her classmates turning over the the dark side one by one, Beth doesn't know who to trust - and who to kill. 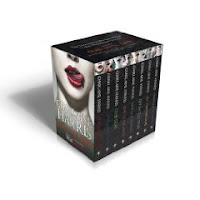 The Sookie Stackhouse Boxset by Charlaine Harris (not YA but I thought I'd post it here anyway as it's so pretty:D )
Sookie Stackhouse is a cocktail waitress in a little bar in Bon Temps, a small town deep in Louisiana. She's funny and pretty and well-mannered, but she doesn't have that many close friends - mind you, that's not so surprising when you consider how few people can appreciate her abilities as a mind-reader. It's not a quality that has the guys beating down her door - well, unless they're vampires or werewolves or the like . . . but they're not just supernatural freaks, some of them are friends, even family . . . The box contains: Dead Until Dark, Living Dead in Dallas, Club Dead, Dead to the World, Dead as a Doornail, Definitely Dead, All Together Dead, From Dead to Worse.
Posted by I Want To Read That at 19:37

I purchased The Sookie Stackhouse Boxset a little while ago as well. I'm addicted to True Blood.

Charlaine Harris rocks! That is so that you have the True Blood box set.
Split by a Kiss sounds hilarious. This is the first time I've read the blurbs of luisa's books. SPAK sounds really fun. Enjoy!

Luisa and her books are awesome and I'm looking forward to hearing what you think about the Sookie Stackhouse series. I can't decide if I want to read them or not!

Oh, those Luisa Plaja books are *awesome*, you'll love 'em! That Deadly Little Secret book is sounding interesting to me recently too.

I've been wanting to read the 1st two. They sound so cute and Vanessa at Today's Adventures loved them.