The Scarlet Letterman by Cara Lockwood 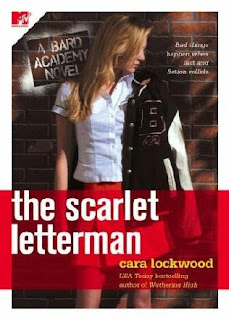 From Amazon: Miranda is back for her second semester at Bard. She's got the ghost faculty in her debt, a new boyfriend (Ryan Kent), and even an A in English. But just when she thinks everything is finally starting to go her way, faculty start disappearing and Headmaster Bronte begins to suspect that Miranda is involved. To make matters worse, Miranda discovers new and disturbing rumors about her new boyfriend, speculating that he may have caused his ex-girlfriend's death. Are the rumors true? Or are they just planted by a jealous Parker Rodham (the school Queen Bee and Bully)? Miranda has to solve the mystery of her boyfriend's ex and try to save the faculty, all while trying to pass her spring finals.

I’m really liking this series. I found myself thrown back into Miranda’s world and the weird but wonderful Bard Academy. The books are really clever - using a classic as a theme and incorporating it into the story yet keeping the story fresh and original. It was great fun to read and I enjoyed spending time with Miranda and her friends. I’m really looking forward to the third Moby Clique and hope more are published in this really addictive and brilliant series!

This sounds good! I love updated classics. Thanks for the great review.

I haven't even heard of this series before so thanks for the introduction.

I love the name and title!