My So Called Phantom Love life by Tamsym Murray 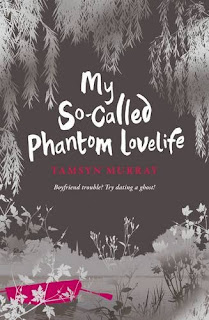 For Review: Piccadilly.  Published 24 March 2011
From Goodreads: I knew the boy was different when I saw him walk on water…

When fourteen-year-old Skye Thackery meets Owen Wicks, it’s not exactly love at first sight. She’s getting over a broken heart and he’s – well – a ghost. But as Sky gets to know him, she can’t help wondering what it would be like to kiss him. Dating a ghost isn’t easy, and things get worse when Owen declares he’s found a way to stay with Skye forever. His plans make her uneasy – the shadowy organisation which claims to be able to help him is bad news, and it seems Nico, her ex, is involved too.

As Owen prepares to risk everything, Skye begins to wonder if she really has a future with him, or if his desire to be more than just a ghost will cost them everything.

I love this series!  They are so much fun to read.  I find myself picking them up and not putting them down until I've finished.

We catch up with Skye shortly after the events of My So Called Haunting.  When Skye and her friends have an accident on the lake and almost drown, it is a ghost that helps Skye save her best friend.  Befriending him, and finding herself very attracted to him she tries to help him sort out what is keeping him here so he can move on.  On top of that Nico seems determined to get back into Skye's life, but can she ever trust him again?

Skye is such an awesome character and I love spending time with her.  She so honest and sweet that I instantly like her and enjoy spending time with her. I also love how she interacts with Celestine and Jeremy - such a typical teenager in that respect.  And I adore Mary.  There is one scene involving her that almost made me choke it made me laugh so hard - it's the one where Skye asks her to speak English for once and ... well,  let's just say she hits the nail on the head so to speak!

I'm glad Nico's back.  I adored him in the last installment - at least until the scene in the cemetery and then I had no idea what to think of him.  Like Skye I was completely torn.  I was really glad to see him back and I really like the direction his story is taking.

I can't praise this series highly enough.  As I said they are such great fun to read and they always leave me wanting more.  I hope there are many more to come!  On a side note, can I just say that I love the new cover designs - they really capture the feel of the books.

Email ThisBlogThis!Share to TwitterShare to FacebookShare to Pinterest
Labels: 4 Stars, For Review, My So Called Phantom Lovelife, Reviews, Tamsyn Murray

This does sound really great and funny, must add this series to my TBR list. Thanks for the review!

Thanks for your review! I hadn't heard of this series before.

Really glad you enjoyed this one - I'm looking forward to it!