Jenna and Jonah's Fauxmance by Emily Frankin and Brendan Halpin 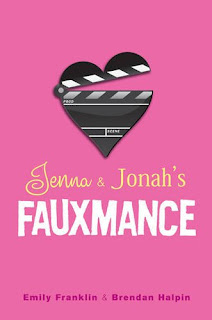 For Review: Bloomsbury.  Published 7 March 2011
From Goodreads:  Fans of romance don't need to look any further than the fauxmance brewing between teen idols Charlie Tracker and Fielding Withers—known on their hit TV show as Jenna and Jonah, next-door neighbors flush with the excitement of first love. But it's their off-screen relationship that has helped cement their fame, as passionate fans follow their every PDA. They grace the covers of magazines week after week. Their fan club has chapters all over the country. The only problem is their off-screen romance is one big publicity stunt, and Charlie and Fielding can't stand to be in the same room. Still, it's a great gig, so even when the cameras stop rolling, the show must go on, and on, and on. . . . Until the pesky paparazzi blow their cover, and Charlie and Fielding must disappear to weather the media storm. It's not until they're far off the grid of the Hollywood circuit that they realize that there's more to each of them than shiny hair and a winning smile.

This one is really sweet and quick to read.  I loved the dual narration and it works really well having the two authors pair up to write a character each.  These two did a superb job in making the characters ring true when they were being perceived from the other's point of view.

I really liked the premise.  I have a slight obsession with TV shows and films so I really enjoyed these characters being actors on a popular TV show.  It also gives a fun insight into what really goes on behind the scenes and how much of what we see as an audience is just a 'brand'.

Jenna and Jonah aka Charlie and Fielding (Aaron) are great characters and I liked them both.  Fielding did have the tendency to be a bit of an ... well he wasn't always that nice to Charlie but I could understand why.  And Charlie seems too invested in fame at times but you can see that it's because she doesn't know different. I liked their banter and the way they seemed to press each other's buttons!

I have to say I did prefer the first 2 thirds of the book.  It takes a direction I was expecting in the last third and without giving anything away I think I would have preferred it to stay where it was.  This will probably make much more sense when you read the book!  I also would have like just a tad more romance between the two but the ending is incredibly sweet! *sighs*

Overall this was a great introduction  to a writing team that promises to be really, really good.  They have also written The Half-Life of Planets  and I will have to get myself a copy.  I hope they write many more books together and I will certainly be picking them up.

Thanks for the great review! I think I'd like this...