My Soul To Save by Rachel Vincent 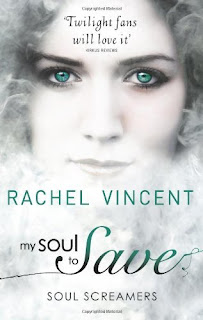 For Review: Mira Ink. Published February 2011
"If she were going to die, I’d already be screaming. I’m a banshee. That’s what we do.”

The last thing Kaylee needs right now is to be skipping school, breaking her dad’s ironclad curfew and putting her boyfriend’s loyalty to the test. But starry-eyed teens are trading their souls for a flickering lifetime of fame and fortune in exchange for eternity in the Netherworld — a consequence they can’t possibly understand. Kaylee can’t let that happen, even if trying to save their souls means putting her own at risk....

I'm really enjoying this series!  They are so much fun to read -  I love the characters and the world.

We catch up with Kaylee shortly after the events in My Soul To Take.  When the lead singer at a concert dies in front of Kaylee she doesn't understand why she doesn't start screaming.  It turns out teens are unwittingly selling their souls for fame and fortune.  When someone close to Tod appears on the reaper's list and he realises she is going to die without possession of her soul he begs Kaylee to help...

While I wasn't as invested Addy's story as much as I would have liked my investment in Tod, Kaylee and Nash meant it didn't particularly matter.  I liked the whole idea behind the storyline - 'starry-eyed teens trading their souls for fame and fortune' - and I am pleased that Kaylee has the compassion to need to help.  It's that side of her character that I really like.  But I just didn't quite connect with Addy's character, although I did think she completely redeemed herself in the end.

Kaylee and Nash still have amazing chemistry and I love their relationship.  I found it equally frustrating and amusing that they constantly got interrupted and hardly had any time alone together.  I'm really hoping that My Soul To Keep focuses more on their relationship and addresses some of Kaylee's insecurities about Nash's intentions.

I really liked Kaylee's dad too, and enjoyed their interactions.  I find their relationship really interesting and am looking forward to seeing it evolve.  I also need to mention Tod.  While I found him intriguing in the first book I am now starting to understand why many readers are hoping for a Kaylee/ Tod relationship.  There is something about him and I can't quite put my finger on it.  I loved that we got to see how desperate he was to save Addy - it showed a more caring side to him.  But he still comes across as slightly dangerous!  I just loved the ending!

I can't wait for more of this series and will be reading My Soul To Keep as soon as it hits the shelves.

Email ThisBlogThis!Share to TwitterShare to FacebookShare to Pinterest
Labels: 4 Stars, For Review, My Soul To Save, Rachel Vincent, Reviews, Soul Screamers

I need to read this series! This one sounds like the best.

I really love this series and can't wait for me. I wasn't particularly interested in Addy's story either but I'm still just as excited to read te next book as I was to read thisone.