The Dead and Buried by Kim Harrington 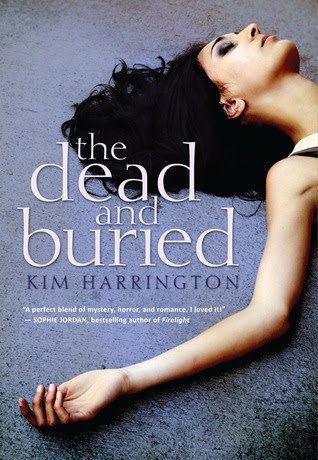 A haunted house, a buried mystery, and a very angry ghost make this one unforgettable thriller.

Jade loves the house she's just moved into with her family. She doesn't even mind being the new girl at the high school: It's a fresh start, and there's that one guy with the dreamy blue eyes. . . . But then things begin happening. Strange, otherworldly things. Jade's little brother claims to see a glimmering girl in his room. Jade's jewelry gets moved around, as if by an invisible hand. Kids at school whisper behind her back like they know something she doesn't.

Soon, Jade must face an impossible fact: that her perfect house is haunted. Haunted by a ghost who's seeking not just vengeance, but the truth. The ghost of a girl who ruled Jade's school — until her untimely death last year. It's up to Jade to put the pieces together before her own life is at stake. As Jade investigates the mystery, she discovers that her new friends in town have more than a few deep, dark secrets. But is one of them a murderer?

I am a massive fan of Kim Harrington’s previous books (Clarity and Perception) so I knew I would be in good hands here. Anyone looking for a great ghost story need look no further!

This was quite creepy! I was surprised actually because I don’t usually get creeped out easily – I think it is the way the book is written – as a contemporary rather than a horror if that makes sense. It makes it all the more believable.

In addition to the creep factor we also get a really sweet and genuine romance – I really liked that element of the book. Plus I loved Jade – she is just brilliant! And I also really enjoyed the family dynamic that Jade has – and the issues they face and work to overcome.

Can’t wait to see what Kim Harringot writes next!