The Waiting Sky by Lara Zielin 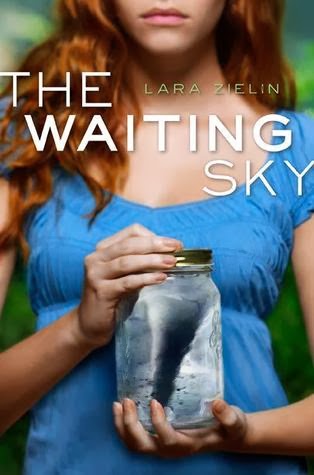 From Goodreads: One summer chasing tornadoes could finally change Jane's life for the better

Seventeen-year-old Jane McAllister can't quite admit her mother's alcoholism is spiraling dangerously out of control until she drives drunk, nearly killing them and Jane's best friend.

Jane has only one place to turn: her older brother Ethan, who left the problems at home years ago for college. A summer with him and his tornado-chasing buddies may just provide the time and space Jane needs to figure out her life and whether it still includes her mother. But she struggles with her anger at Ethan for leaving home and feels guilty--is she also abandoning her mom just when she needs Jane most? The carefree trip turned journey of self-discovery quickly becomes more than Jane bargained for, especially when the devilishly handsome Max steps into the picture.

I will admit it was the whole chasing tornado aspect of the story (and that super cool cover!) that made me buy this and I am so glad I did. I was really surprised by this book – it was much more than I was expecting it to be.

I loved the way the author dealt with the mother’s alcoholism – and Jane’s need to be there for her mother. I liked that her mother was shown to have a problem – but not portrayed as the bad guy – just someone who needs to recognize for themselves that they need help. I also liked that Jane obviously loves her mother – but that guilt is also part of what is making her stay. That ‘what if’ – what if something bad happened to her mother that she could have prevented? I really like that aspect of the story and the way her brother helps her to understand it’s not her responsibility to fix her mother.

I also liked the romance part of the story (of course!) and the tornado chasing was cool. I’ll definitely be reading more of Lara Zielin's work.