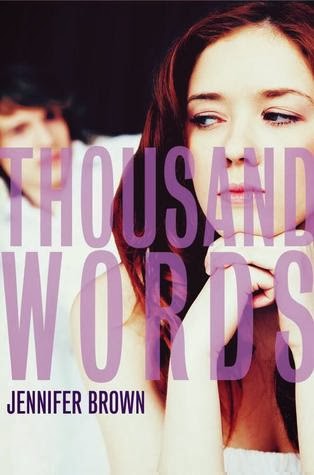 From Goodreads: Ashleigh's boyfriend, Kaleb, is about to leave for college, and Ashleigh is worried that he'll forget about her while he's away. So at a legendary end-of-summer pool party, Ashleigh's friends suggest she text him a picture of herself -- sans swimsuit -- to take with him. Before she can talk herself out of it, Ashleigh strides off to the bathroom, snaps a photo in the full-length mirror, and hits "send."

But when Kaleb and Ashleigh go through a bad breakup, Kaleb takes revenge by forwarding the text to his baseball team. Soon the photo has gone viral, attracting the attention of the school board, the local police, and the media. As her friends and family try to distance themselves from the scandal, Ashleigh feels completely alone -- until she meets Mack while serving her court-ordered community service. Not only does Mack offer a fresh chance at friendship, but he's the one person in town who received the text of Ashleigh's photo -- and didn't look.

Acclaimed author Jennifer Brown brings readers a gripping novel about honesty and betrayal, redemption and friendship, attraction and integrity, as Ashleigh finds that while a picture may be worth a thousand words . . . it doesn't always tell the whole story.

The Hate List is still one of my all time favourite reads so I get a little over excited each time Jennifer Brown publishes a new book. Like her others – this tackles a serious issue head on – and I found it really enjoyable and thought provoking too.

I really liked the main character Ashleigh – she’s easy to like and relate too, but she’s also really tough/strong too. What happens to her could have really affected her negatively but she does well to cope with it all. And I’m glad she does acknowledge her part in what happen (which is definitely not to say it was her fault at all) – but by embracing her punishment I think it showed a great strength of character.

To be honest, I’d never given much thought to sexting – or the fact it could be deemed as distributing child pornography. I’m not sure what the laws are in the UK – and while the outcome depicted in this seems harsh it does help to demonstrate the seriousness of the issue. And is food for thought.

I also really liked the friendship that develops between Ashleigh and Mack – although I would have like to have more closure on his part of the story. Another great read by Jennifer brown!