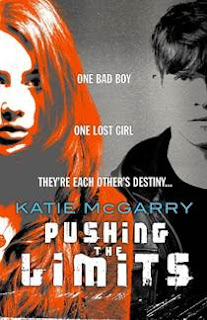 From Goodreads: No one knows what happened the night Echo Emerson went from popular girl with jock boyfriend to gossiped-about outsider with "freaky" scars on her arms. Even Echo can't remember the whole truth of that horrible night. All she knows is that she wants everything to go back to normal.But when Noah Hutchins, the smoking-hot, girl-using loner in the black leather jacket, explodes into her life with his tough attitude and surprising understanding, Echo's world shifts in ways she could never have imagined. They should have nothing in common. And with the secrets they both keep, being together is pretty much impossible.

Yet the crazy attraction between them refuses to go away. And Echo has to ask herself just how far they can push the limits and what she'll risk for the one guy who might teach her how to love again.

This is hands down my favourite read so far this year - I absolutely loved it!

The story is a dual narrative (which many of you will know I love) and it works brilliantly here.  Not only does Katie McGarry give a distinct voice to each character but they both have an equal weight in the story.  I was just as invested in Noah, and what was happening in his life, as I was Echo's.

I loved both characters from the beginning.  Echo's story is something of a mystery that needs unravelling over the course of the novel and I enjoyed every minute of Echo trying to remember what had happened and coming to terms with it.  She's also having to come to terms with the death of her brother as well as everything else and her grief for him is palpable.  You really get the impression that he was her life line.

At first I though I was going to hate her father - but as the story unfolds you just see someone trying to make sense of what has happened and his guilt over the fact it happened. I really loved him by the end of the book.

Noah is referred to as the 'bad boy' but in different circumstances he would have been in the same circle of friends as Echo.  There is a lot of anger in him (understandably) and I couldn't help but think his brother's foster parents were just making things worse.  As for Isaiah and Beth - I adored them.  They were obviously family to each other and as secondary characters they really stood out.  I'm not surprised that Beth will be getting her own story - I can't wait to read it!

I also loved Mrs Collins and how she deals with Echo and Noah.  She really does come across as someone who cares and someone who has the skills to actually help.

As for the relationship that develops between Echo and Noah?  Well, what can I say?  It it absolutely awesome!  Gentle, a real connection, everything you want in a romance, but believable too.  It definitely gives all of my favourite romances a run for their money.  I just loved it!

I have been describing Pushing the Limits as the potential love child of Simone Elkeles Perfect Chemistry and Courtney Summers' Cracked Up to Be and I stand by it.  I has everything I loved about those books and more.  I don't know what else to say - except please read it.  It's seriously good!

And here is the character interview with Beth...

Hi Beth! Can you tell us a bit about yourself?

I’m a Junior in high school, soon to be a senior. I work at the dollar store a couple of blocks from my aunt’s house. I split living between my aunt and my mom. My mom doesn’t have the best taste in men. There are times I have to cut out quick and lay low at my aunt’s place so one of mom’s psychopaths of the week doesn’t beat the crap out of me.

You seem very close to Noah and Isaiah - what are they like? And who are you closest to?

Noah and Isaiah are the closest thing I’ve ever had to brothers. I trust them, which says a lot.

Noah, I guess, would be the leader of our sad parade of misfits. He’s always calling the shots; making decisions. He can be bossy as hell. Sometimes it’s annoying, but he does it because he cares.

I’m closest to Isaiah. We’ve known each other since we were fourteen and my aunt took him in as a foster kid. Isaiah is easy going, yet not. Don’t let him fool you. He may be all relaxed back in his seat looking like he doesn’t have a care in the world, but his mind is going—twenty-four seven. He knows everything about cars, possibly a little too much.

I don’t know what to say about him…he’s my best friend.

You haven't had the easiest of upbringings. If there was anything you could say to the people who have treated you badly what would it be?

That they can rot in hell. And that’s a special shout out to the string of reject boyfriends my mom’s dated.

What would you say your best quality is? And your worse?

Well hell…can we talk about Isaiah and Noah again? I don’t know. My best quality? I can take care of myself. I know how to pack up and move on a moment’s notice. I’ve had practice in it all my life.

My worse? I’m sure you can talk to anyone at school and they’d give you a laundry list. I do a lot of stupid stuff at times and I regret it after I do it…but sometimes life is what it is, you know?

What do you think people would be surprised to learn about you?

That I’m smart. No, I’m not all honor student, but I have a brain and it works properly. Someday, I’m going to be more than all of this.
---
Thanks Beth!  I can't wait to read your story when it's released!


Passion For Life
Pen To Paper
Narratively Speaking
So Many Books So Little Time
Planet Print
Once Upon a Bookcase
Fluttering Butterfiles
Feeling Fictional
Bookaholics Book Club
And if that's isn't enough to convince you to read it - check out the wonderful trailer:

Pushing the Limits is available to buy now.
Posted by I Want To Read That at 06:00

Mrs Collins is awesome! Love that you love this as much as I do.