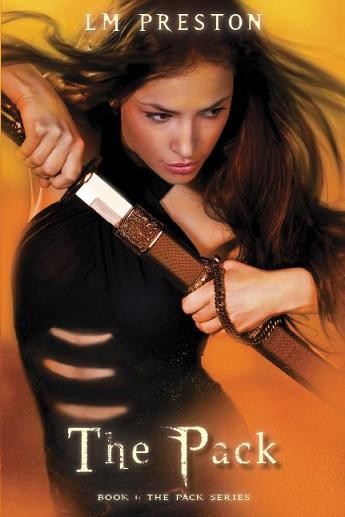 Here is the lovely new cover for The Pack. With The Pack-Retribution (Book 2) coming out in print this September, 2012, the cover for the first book was updated to match and I love it. I think they have done a brilliant job making it eye-catching and keeping it in tone with the story.

Here is the synopsis:

Description: Shamira is considered an outcast by most, but little do they know that she is on a mission. Kids on Mars are disappearing, but Shamira decides to use the criminals most unlikely weapons against them the very kids of which they have captured. In order to succeed, she is forced to trust another, something she is afraid to do. However, Valens, her connection to the underworld of her enemy, proves to be a useful ally. Time is slipping, and so is her control on the power that resides within her. But in order to save her brother's life, she is willing to risk it all.

Praise for THE PACK

- I was most impressed by the author's world building abilities. Mars felt real right from the beginning. I gave it to one of my sons to read. He did tell me that "the fighting moves were interesting" and he thought "her sword and weapons were cool.".~By Kristien Howell

- This sci-fi for YA jets along, full of action and humor and pathos and even a bit of romance. ~Darby Karchut

“Well, I guess you can take care of yourself,” Valens said. “I’m impressed.” He came up behind Shamira while she bent down and removed the truth tick from Lenny’s neck. She crushed the tick in her hands and placed it in a pouch on her belt.

“What do you want?” she asked sharply while she walked past him to Lenny’s flunky.

“I want what you want—answers. I’ve been tracking this guy for weeks, trying to find out about my younger sister, who was taken over a month ago,” he said. She could tell from his voice that he was confident and sincere. He was also a bit older, and Shamira noticed the newness in the deepness of his voice, as if he was still getting used to his grownup man-voice.

“Where are your parents? Why aren’t they doing this for you?” she asked. Then, she pulled off the hook knives that held the metal web in place, and the victim fell loudly to the ground with a cold thud. “If your sister has gone missing, why aren’t your parents doing something about it instead of just you?”

“I’m pretty sure they’re dead. My dad was a member of the Security Force Elite on Sector One. One day when I came home, I found my mom cut down dead in our living room. My father and sister were nowhere to be found. I know he would have killed anyone who harmed either of them. He and my sister were just gone,” he said and walked cautiously toward her.

“Back up. I don’t like people close, so keep your distance.” She squeezed the metal ball, and the web retracted back inside. Squeezing it locked, she slid it into the pocket of her belt. “Well, look, I have to go. Just… just stay away from me, okay?” Shamira turned away from him and ran at top speed to her motorcycle.
---

Sounds good right?  You can read my review for it here.

Want to purchase The Pack? Here are the links:

Facebook:http://tinyurl.com/2fev6qc
The Pack-Retribution (Book 2) available for review via netgalley.com, comes out in print this September, 2012.
Posted by I Want To Read That at 06:00

Email ThisBlogThis!Share to TwitterShare to FacebookShare to Pinterest
Labels: LM Preston, The Pack

I like the new cover. She kind of looks like Jennifer Lopez, or is it just me? ;)