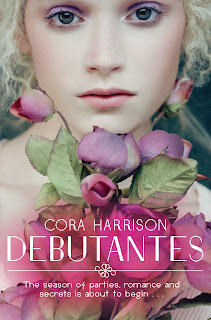 As part of the blog tour for Cora Harrison's new novel, Debutantes, she has stopped by to share Rose's character profile...

Rose Derrington is the youngest of the four Derrington girls. She is the only one of them who was not born in India. By the time of her birth, Michael Derrington’s father had died and he was now Earl of Derrington so Rose was born in the magnificent old house, Beech Grove Manor in 1911 and so she is twelve in ‘The Debutantes’. Her mother died when she was four years old so she was brought up by Great-Aunt Lizzie, a very strict old lady who has never moved out of the Victorian Age, either as regards her clothing or her attitudes.

Great-Aunt Lizzie fancies herself as a teacher and in any case the family are too poor now to afford a governess for Rose, so she spends hours in the schoolroom, at the top of the huge house, with Great-Aunt Lizzie teaching her. Rose is a genius for everything regarding English literature and writing. She devours books and knows most of the classics off by heart and she writes wonderful stories. Unfortunately, she is poor at mathematics and this causes Great-Aunt Lizzie to say that Rose must spend long hours at maths and she didn’t bother much with other subjects.

Daisy worries about Rose. She knows that her youngest sister is the cleverest of the family and she wonders whether any money that might come from her film-making should be devoted to paying school fees for Rose rather than buying dresses for Violet’s debutante season.

Rose has a wonderful sense of humour and she continually mocks herself up with her witty remarks and invented newspaper headlines – Delicate Child Force-fed Milk by Brutal Relations: Earl’s Mansion Hides Broken Heart, she murmurs at table when told to drink up her milk.

Rose is not strong and her father worries about her health as Rose’s mother died of tuberculosis and, in those days, it was supposed to be a disease that was inherited. Rose is very thin and she gets lots of colds and coughs so the damp, cold house is very bad for her. (I, as an author, plan to do something about Rose’s health in book 2 of the ‘Debutantes’. I think that the house at Beech Grove Manor and the damp climate of England is not good for her.)

Ambition: To be a writer and a journalist.

Favourite occupation: Writing stories and making scrap books of people from the fashionable world, such as Prince George, and scrap books of lurid headlines, cut from newspapers.

Favourite sport: Like her sisters, she loves riding and she loves drag hunting where the hounds follow a trail of aniseed and the riders follow the hounds. Great fun, rushing through woods, jumping over hedges and splashing through rivers until eventually the hounds find the bag filled with strong-smelling aniseed and sometimes a few treats.
---
Thanks Cora!

Debutantes is available to buy now. My review should be up later today:)

Don't forget to check out the rest of the tour - the next stop is tomorrow with Jenny @ Wondrous Reads.
Posted by I Want To Read That at 06:00

ooh, thank you for the fab post! I loooved Rose's character, and I thought her newspaper headlines were so cool and imaginative :) And I also love how she wants to be a writer :))