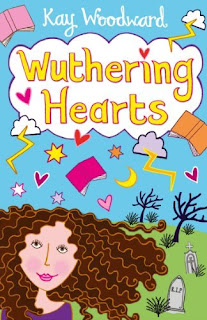 From Goodreads: Passion, the Yorkshire moors, a wild and handsome stranger . . . sound familiar?

When Robert arrives in town with his dark good looks and mysterious background, Emily has a huge crush! It’s almost enough to take her mind off this year’s school play . . . miserable, wailing Wuthering Heights.

But Robert is no prince, with his black moods and fierce temper. The beautiful untamed moors would be the perfect backdrop to their fiery romance, if only Emily could work it out.

On stage or off stage, will Emily ever be the Cathy to his Heathcliff?

This is my first book by Kay Woodward and it certainly won't be my last!  It's fun, really romantic and a clever spin on the Bronte's classic.

When Emily learns her school play will be Wuthering Heights, lets just say she is less than thrilled.  Of course this doesn't stop her from wanting the lead role.  Add in the new boy, Robert, and a good deed from her dad and Emily has one rather large crush!  But Robert can be completely charming one minute, and completely moody the next - what's going on with him and will she ever work it out?

I loved the concept for this and the Yorkshire moor setting.  And Emily is a character I loved from the first words out of her mouth.  She just so funny - even when she doesn't mean to be - and she's also really nice.  Robert is rather appealing as the moody yet equally charming object of Emily's affections.  You know something must be going on with him and it's fun watching Emily work it out.  And the two of them have great chemistry!

Kay Woodward writing is fun and witty - I really loved it. She managed to capture my interest from the get-go and I'll definitely be on the look out for Jane Airhead. 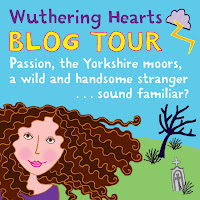 As part of the Blog Tour for Wuthering Hearts Kay had kindly stopped by to talk about her ideal Cathy and Heathcliff...

Wow. This is a cool question, but a very tricky one. When she wrote Wuthering Heights, Emily Brontë created two of the most complicated and compelling characters ever. Playing either of them on stage or screen would be a challenge for any actor. So here goes. But these are only my suggestions. I’d love to hear what you and your readers think.

By the time she’s six, Cathy can ride any horse in the stable. She‘s a ‘haughty, headstrong creature’ with a ‘bold, saucy look’. Oh, and she’s very bossy and always gets her own way. She alternately drives people mad and then charms them until they fall under her spell once more.

Here’s the bit that I think best describes her in the novel:


Her spirits were always at high-water mark, her tongue always going—singing, laughing, and plaguing everybody who would not do the same. A wild, wicked slip she was—but she had the bonniest eye, the sweetest smile, and lightest foot…

This one has been bugging me for days. But I think I’ve made my mind up at last. I think Anna Friel would be perfect.

He’s often described as a Byronic (which I always think sounds like a mixture of bionic and moronic, but actually means dark and romantically brooding). He’s tall and athletic, with thick brows and dark eyes. Emily Brontë wrote that he had an ‘almost idiotic excess of unsociable moroseness’. So he’s probably not the best person to invite to a party. But this is my favourite quote, which sums him up best of all, I think.

A half-civilised ferocity lurked yet in the depressed brows and eyes full of black fire, but it was subdued; and his manner was even dignified: quite divested of roughness, though stern for grace.


So, the ideal Heathcliff would have to be tall, dark, brooding, morose, thick-browed, dark-eyed and with a stormy nature simmering beneath his manners.

It’s got to be Robert Pattinson, surely.


What do you think?!

---
Thanks Kay! Robert Pattinson - I love it! And I love your choice of Anna Friel - I can really picture it:)

Next stop on the Blog Tour is tomorrow at The Mile Long Bookshelf.
Posted by I Want To Read That at 00:01

Fab to be here! I'm REALLY looking forward to hearing everyone else's ideal Cathy and Heathcliff. :-)

Not a fan of Robert Pattinson, but Anna Friel could really work as Cathy. She reminds me of the woman who played her in '09 a little.

I have to read this! It just sounds absolutely amazing. I've seen so many good reviews everywhere, and I love Wuthering Heights.
Brilliant review and interview! Thank you both!