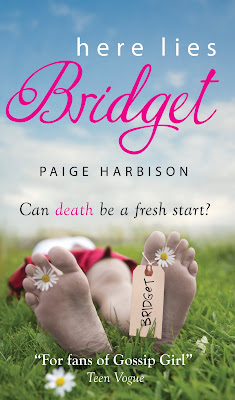 From Goodreads: Bridget Duke is the uncontested ruler of her school. The meanest girl with the biggest secret insecurities. And when new girl Anna Judge arrives, things start to fall apart for Bridget: friends don't worship as attentively, teachers don't fall for her wide-eyed "who me?" look, expulsion looms ahead and the one boy she's always loved—Liam Ward—can barely even look at her anymore.

When a desperate Bridget drives too fast and crashes her car, she ends up in limbo, facing everyone she's wronged and walking a few uncomfortable miles in their shoes. Now she has only one chance to make a last impression. Though she might end up dead, she has one last shot at redemption and the chance to right the wrongs she's inflicted on the people who mean the most to her.

And Bridget's about to learn that, sometimes, saying you're sorry just isn't enough….

Here Lies Bridget was a complete surprise for me.  I had heard some really good things about it but it turned out to be so much more than I was expecting.  I just fell in love with the concept, and really enjoyed Paige Harbison's writing style.

Bridget is not a character that is easy to like.  In fact, in the beginning I found most of the things she did incredibly unlikeable - but she kind of really grew on me.  I thought Paige Harbison did a great job in making her 'real' - someone I felt I could really like if only she would be herself.  You had glimpse of who she could be in the flashbacks and in her old relationship with Liam.  And, oh how I loved Liam * sighs*  There were some really great scenes between those two.

I love the way Bridget tries to redeem herself at the end - the way she really gets to see how her actions affect others - and it was here I completely fell in love with the concept of the story.   I especially loved the interaction's between her and Meredith!  And, of course, between her and Liam.  I also loved Michelle's reaction and hope she sticks to it!

As I said this one really surprised me.  It made me cry actually and I really wasn't expecting that!  While I appreciate not everyone is going to like Bridget, I found this to be a great debut and I'll certainly be looking out for Paige Harbison's next book. 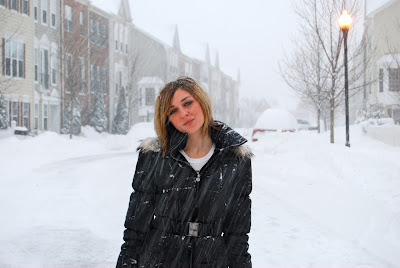 As Part of the blog tour for the UK release, Paige Harbison kindly agreed to answer a few of my questions...

I love the concept for the story. How did you come up with the idea for it?

I was on a train trip with a (now-ex) boyfriend that wouldn’t leave me alone. I was pretending to sleep when an idea came to me. A series based on each of the seven deadly sins. Then I started writing, and it came out as just a girl who suffered from several of them.

Bridget is (a tad) unlikeable at the start of the novel, but I grew to really love her by the end. How did you come up with her character?

She is, to me, the person all of us try hard not to be. She says and does things we all think but don’t do because we have what it takes to not. But there are a lot of people who don’t have what it takes and they do act like her. She’s a very real character. A lot of people have expressed a distaste for how she acts—but I mean…that’s just how soooo many people are. I’m sorry if that sucks, but it’s true.

I understand there are already plans to make it into a movie in the US! Do you have an ideal cast?


Either Catherine Keener or Patricia Clarkson for Meredith—or someone like them, anyway, I think they’re both 52, and therefore too old for the character. They look great, don’t they? 52!!

My favourite aspect is the ability to tell the stories I want to read. I get in a mood and I might not be able to find the right book that can take me into that world. But I can write it.

The most challenging part is coming up with the crescendo and climax—the concept is always easy. It’s the actual, ya know, plot that’s hard.

Are there any YA books you can recommend? Perhaps something you have read recently the completely blew you away?

The Goddess Test is awesome. Has a great mod. Also The Mortal Instruments series.

Here Lies Bridget by Paige Harbison, published by Mira Ink £6.99 http://www.miraink.co.uk/
Posted by I Want To Read That at 11:21

You know I really loved Here Lies Bridget...and yes I definitely know people like her! Also love the movie choices :)

Great review and interview! I love how she thought of a book for the seven deadly sins when her exboyfriend was waking her up from sleep. Waking someone up from a cozy nap should be the eighth deadly sin. :) I will definitely be picking this book up soon.