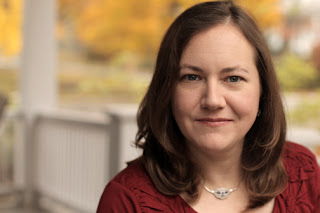 Kate Kaynak is the author of the Ganzfield series. Minder is the first book in the series (my review is here) and Adversary is the second.

She kindly took the time to answer a few of my questions...

What was the inspiration behind Minder and the Ganzfield series?

Minder started as a thought experiment. I'd recently completed reading the Sookie Stackhouse books and the Twilight saga, and I realized both series had telepathic characters who could only fall in love if they met someone whose thoughts they COULDN'T read. I started to consider what kind of a person a telepath COULD love…as well as what kind of a person wouldn't mind being in a relationship with someone who knew their every thought.

I love all the different psychic abilities. What kind of research did you do for the novel?

Most of the special abilities found in the Ganzfield world are found in parapsychology, which is a fringe area of psychological research. I used a few books like Reading the Enemy's Mind to learn more about the U.S. government's former psychic spy program: Project Star Gate (yes, it really existed). I also looked into historical claims of special abilities such as those of William Underwood; he was the first person to claim to have pyrokinesis, the ability to control fire. I've got a background in psychology, so I drew on that to work out how to enhance and control special abilities in the brain. The settings are real places in New Jersey and New Hampshire. Oh, and I named most of the bad guys after ex-boyfriends.

I adored Trevor! Do you have a favourite character from the series – or one you find it easier to write for?

I love writing from Maddie's point-of-view, and I have a major book-crush on Trevor that my husband only tolerates because Trevor's partially based on him. The romance was a delight to write, since the emotions of a sixteen-year-old in love for the first time were so intense. Beyond that, I simply adore Drew; he cracks me up.

If the Ganzfield books were made into a TV series or Movie who would be your ideal cast?

I've only cast two people in my head.

Dr. Williamson would be played by James Pickens, Jr.:

Trevor would be played by Steven R. McQueen:

How many books are planned for the series? Can you give us any hints on what’s in store for the characters?

There are six books in this plot arc. I'm writing book 5 now and have the outline for #6. I may do a seventh from Seth's point-of-view, since his story diverges from Maddie's in the later books, and there's a character coming in book 4 who might narrate a book later on, as well. As for hints, the names of the later books give a few clues: 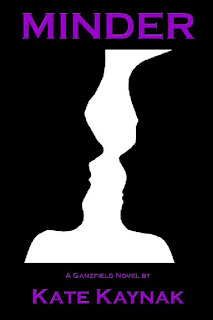 What inspired you to become a writer?

What is a typical writing day like for you? Do you have any ‘must-haves’ before you can start?

I have three kids under age six at home, so I do most of my writing after they’ve gone to sleep at night. I also have a playlist of songs that put me into the Ganzfield world, including Gary Jules' version of Mad World, Scissor Sisters' Fire with Fire, Muse's MK Ultra, Velvet Chain's Strong, Glenridge's Angels, and Regina Spektor's Fidelity.

Are there any YA books you would recommend? Perhaps something you have read recently that completely blew you away.

There's SO much great stuff out there these days, including some amazing series! I'm currently catching up with Rachel Caine's Morganville Vampires--start with Glass Houses. In the past year...Scott Westerfield's Uglies, Suzanne Collins' Hunger Games, Maggie Stiefvater's Shiver, Garcia & Stohl's Beautiful Creatures, Kristen Cashore's Graceling, Holly Black's White Cat, Jessica's Guide to Dating on the Dark Side by Beth Fantaskey, and Paranormalcy by Kiersten White. Keep an eye out for Jennifer L. Armentrout's Half-Blood; I loved the manuscript enough to pitch it at Spencer Hill--it comes out in September of 2011. Those are the stand-outs.

Thanks Kate! I love that you use your ex-boyfriends names as the villains! Classic! And I love your pick for Trevor - it's just as I pictured him!

You can find Kate at the following places:

And here's the trailer for Minder:

Great interview.
I love the actor picks too!

Thanks for interviewing, Sammee! I keep seeing Steven R. McQueen in my head when I'm writing Trevor; he really is perfect for the part. Random trivia: he's the grandson of actor Steve McQueen.