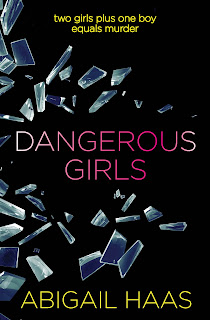 From Goodreads: It's Spring Break of senior year. Anna, her boyfriend Tate, her best friend Elise, and a few other close friends are off to a debaucherous trip to Aruba that promises to be the time of their lives. But when Elise is found brutally murdered, Anna finds herself trapped in a country not her own, fighting against vile and contemptuous accusations. As

Anna sets out to find her friend's killer; she discovers hard truths about her friendships, the slippery nature of truth, and the ache of young love.

As she awaits the judge's decree, it becomes clear that everyone around her thinks she is not just guilty, but dangerous. When the truth comes out, it is more shocking than one could ever imagine...

You know when everyone is talking about how good a book is and you kind of really want to read it but are also slightly scared that it wont live up to all the hype?  That pretty much sums up how I felt about Dangerous Girls - not only does it sound amazing but so many people kept telling me I would be blown away.  Any you know what - it completely lived up to all the hype and glowing reviews that surround it.  I loved it!

One thing that really surprised me was how engrossed and mesmerised I was by the story when I pretty much disliked every single character.  I found I just couldn't warm to Anna. Elise annoyed me straight away and I felt Tate tried too hard to be / do the perfect thing - you just knew underneath he wasn't going to be able to live up to that.  So I found it really clever that I still wanted to read the book - that I was totally invested in what had happened / what was happening - and I think that is the key to this book.  The way it is put together means you really don't know for sure until the very end what really happened (even if you do suspect!)

Speaking of the end - I loved it and think it made what would have be a really good book a fantastic book!  But I also felt just a little bit cheated in the sense I just wanted a little bit more from that last scene.  I think you'll understand what I mean when you read it.  Because you really should read it.

It would also make the most amazing movie!  Just saying...

Know exactly what you mean about the ending! I finished this last night and was so chilled by that last chapter, and I think the one right before it, that I couldn't sleep for a while! (She definitely did it, she is so budding psychopath it's unreal)

I'm so glad this lived up to the hype for you - that ending deserves to blow you away!

Love the new design as well!

I'm very curious about this one but I'm not sure how I'd get on reading about characters that I really didn't like. I have to admit your review has me much more tempted to give it a try though :o)

I love your new layout by the way!

I've not heard of this one before, but it sounds great! :)

what happened at the end? can you explain it to me please???

Anya - definitely chilling! But so ace.

Nikki-ann - Hope you enjoy it if you do read it!

Anastasia - Have you read it? You can always email me if you want to discuss it:) My email address is on my contact page.