The Distance Between Us by Kasie West 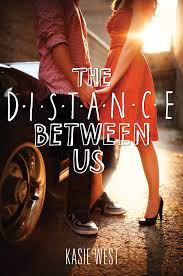 From Goodreads: Seventeen-year-old Caymen Meyers studies the rich like her own personal science experiment, and after years of observation she’s pretty sure they’re only good for one thing—spending money on useless stuff, like the porcelain dolls in her mother’s shop.

So when Xander Spence walks into the store to pick up a doll for his grandmother, it only takes one glance for Caymen to figure out he’s oozing rich. Despite his charming ways and that he’s one of the first people who actually gets her, she’s smart enough to know his interest won’t last. Because if there’s one thing she’s learned from her mother’s warnings, it’s that the rich have a short attention span. But Xander keeps coming around, despite her best efforts to scare him off. And much to her dismay, she's beginning to enjoy his company.

She knows her mom can’t find out—she wouldn’t approve. She’d much rather Caymen hang out with the local rocker who hasn’t been raised by money. But just when Xander’s attention and loyalty are about to convince Caymen that being rich isn’t a character flaw, she finds out that money is a much bigger part of their relationship than she’d ever realized. And that Xander’s not the only one she should’ve been worried about.

This was the first book I read by Kasie West and it definitely wont be my last. I really like her writing style – and this was a really cute romance!

I loved the main character in this. Caymen is so sarcastic and funny – I just loved her. Considering her mother’s story you completely understand why she feels the way she does about Xander - but I was willing her to give him the benefit of the doubt because he just seemed so nice!

A slight quibble – in that I wanted the story to go on longer. Some characters are introduced towards the end and I felt that I wanted more of them and their interactions with Caymen.  But that was because Kasie West had created a good story - I wanted more!

Overall though, this was a great read. Recommended!

Email ThisBlogThis!Share to TwitterShare to FacebookShare to Pinterest
Labels: 4 Stars, Kasie West, Reviews, The Distance Between Us

I'm so excited to check this out-it's on hold at the library and should arrive soon. I adored Pivot Point and am hopeful this will be similarly well-received by me.

I'm anxious to read this one! I loved Pivot Point, in part because of the romance so I'm excited to read a Kasie West contemporary! :) I've been hearing so many good things. So glad you enjoyed it!

This sounds like a pretty good book, I'll have to add it to my Amazon wishlist! Nice review and pretty blog! :) storytellershannon.blogspot.com