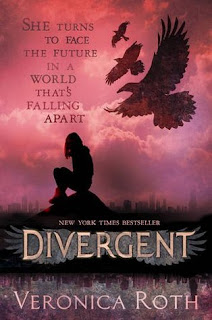 From Goodreads:  In Beatrice Prior's dystopian Chicago, society is divided into five factions, each dedicated to the cultivation of a particular virtue—Candor (the honest), Abnegation (the selfless), Dauntless (the brave), Amity (the peaceful), and Erudite (the intelligent). On an appointed day of every year, all sixteen-year-olds must select the faction to which they will devote the rest of their lives. For Beatrice, the decision is between staying with her family and being who she really is—she can't have both. So she makes a choice that surprises everyone, including herself.

During the highly competitive initiation that follows, Beatrice renames herself Tris and struggles to determine who her friends really are—and where, exactly, a romance with a sometimes fascinating, sometimes infuriating boy fits into the life she's chosen. But Tris also has a secret, one she's kept hidden from everyone because she's been warned it can mean death. And as she discovers a growing conflict that threatens to unravel her seemingly perfect society, she also learns that her secret might help her save those she loves… or it might destroy her.

WOW! Just ... wow. I had heard so many great things about this one when it was first released so I was expecting it to be good but it completely blew me away. I read it in one sitting and absolutely loved it!

The story is set in a world where the society is divided into factions, each representing a particular virtue.  When you are sixteen you take a test to find out which faction will fit you best - and this is used (in theory) as a basis for your choice on which faction you want to belong to,   Once you choose you are faced with initiation - if you fail you end up factionless.

I found the world they live in to be quite harsh.  Not only does choosing a faction mean having to face initiation and possible finding yourself factionless, but if you choose one different from your family then that means turning your back on them.  It must be a difficult choice.  But it does make for interesting reading!  There is an undercurrent of uncertainty, competition and the raised stakes doesn't always bring out the best in people.

I loved Tris and having her voice the story. There is just something about her I really like - she's strong but I'm not sure she realises it. And of course I absolutely loved Four!  And the two of them? Well...!!!!!!

This is seriously action packed.  I loved every minute and really enjoyed working out (or at least trying to work out) what was actually going on.  You know it's going to be something big but I was blown away by the end.  It is a brilliant first instalment in what promises to be a phenomenal series.

I'm glad you liked this book, I did too!