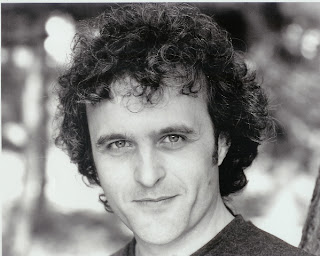 As part of the blog tour for the release of his debut novel Geekhood, Andy Robb stopped by to answer a few of my questions...
---

How did you come up with the idea for Geekhood?

The idea for Geekhood started as something very different! I was fiddling around with an idea that I had for a medieval romance in which a young Witch-hunter falls in love with a girl accused of witchcraft. My agent, Jenny, didn’t think there was much appeal for Young Adults, what with the medieval background, so suggested I try and think of something a bit more contemporary. But, being a Geek, I didn’t want to let go of the fantasy-style aspect and it got me thinking about me when I was that age. And revisiting my teens gave me an interesting perspective on the RPGs I used to play; for me, they were more than just a bit of fun – they were a way of leaving all the Bad Stuff behind: my parents’ divorce, my repeated failure to get a girlfriend and practically everything else that makes being a young adult such hard work. Suddenly, I wanted it to be about the magic we can all create to step out of the real world and not about magic in the traditional YA sense,

I loved Archie’s IM and EM (and his PS!!) How did this come about?

The IM and EM came about from telling a friend about my first ham-fisted attempts to tell a girl I ‘liked’ her. Basically, there was this girl and I was besotted with her, to the point where my voice and body refused to behave normally – I’d suddenly find myself going all squeaky or gabbling like a madman and being unable to stand still or relax in her company. That was where I got the idea for the EM from. What happened with this girl was that, one day, I was given the opportunity on a plate to tell her how I felt. Once again, my body and voice decided to betray me and all through this ordeal, I was aware of this little narrator in my head, my IM, telling me that I was going to mess it up and say the wrong thing and generally make a goof of myself. Which I did. And the pressure got so much that I fainted. Not a good move... But, as I started writing the book, it also made me realise that my IM has been part of me all through my life – but has been most vocal in times of stress – particularly when my parents were splitting up. When my folks were separating, divorce was a big taboo; you didn’t talk about it. As a result, I would talk to myself about it – which isn’t a good idea, no matter how funny it might be. I hope Archie shows that the better idea is to talk to people you trust about your problems – it’s a pressure-release that can really help in the long-term.

I really liked the storyline involving Archie and his parents. It was really interesting seeing their divorce from his perspective. Was this an important aspect of the story for you?

The divorce was an important part of the story for me. I deliberately set the story after the divorce was official, because people tend to assume that once the dotted line is signed, then it’s all done with. Anyone who’s been through divorce as an adult, child or teenager knows that’s not what happens; the fall-out can last for weeks, months or years – it doesn’t just stop when everybody’s living in separate houses. I also wanted to highlight that, amongst all the hormonal carnage that comes with being a teenager, we are all capable of having some quite profound and even wise thoughts at that age. It’s almost as though, when your parents start behaving like they’re in the playground, you make a mental decision to try and see through all the fighting, sniping and insults. Even if it’s managed brilliantly, divorce is not just about the adults in the equation; divorce is an equal-opportunities trauma and it affects everyone, even if they’re keeping quiet about it. 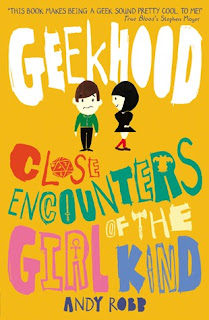 Will Archie have any more Geekhood adventures?

Archie has another Geekhood adventure coming out in 2013 and, dare I say it, we’re exploring even Geekier pursuits than miniature-painting and RPGs...

The publication process has been a real eye-opener and I’ve come to realise that there’s far more to writing a book than just writing a book. What, in my opinion, is most important is that you have utter trust in your publishers. I’ve been very lucky with Stripes as they have, to a man, had a great handle on what I think the book’s about. However, as the writer, you’ve also got to get your head around the idea that other people are going to have their thoughts about what the book’s about. That’s the point where you’ve got to stand back a bit and let the grown-ups do their job; that’s where the trust comes in.

My favourite aspect of writing is also the most challenging: it’s sitting down, on your own and creating something from nothing. There’s a bit in the book where Matt, one of the Geeks, talks about Role-Play Gamers as being like alchemists – they create stories and fantasies from thin air. I think that’s true of any creative process, but it’s quite daunting to do.

Have there been any authors who have been a strong influence on you?

I don’t know if there have been any authors who have directly influenced my work, but a very well-known author once told me that “every writer is a thief”; without knowing it I’ll have sucked up aspects of other people’s work and turned them into something else. I know who I’d like to write like – it’d be Tolkien. The way he weaved such a rich tapestry to create a world full of history and an immediate present still astounds me. I think my influences probably come from people I admire in popular culture: Russell Brand, Bill Hicks and older comics like Tommy Cooper and Frankie Howerd. They knew how to use words to their best effect and I can quote from most of their routines without having to think too hard.

Are there any YA books you can recommend? Perhaps something you read recently that just blew you away?

My favourite, recent YA books have been Sarwat Chadda’s Ash Mistry and the Savage Fortress , because he’s been able to create such a big, bold and beautiful world and stick a 21st Century kid in it and the Bartimaeus books by Jonathan Stroud. The Bartimaeus books pack the right amount of action, intrigue and dry wit alongside a character with whom you can really engage.

Finally, I’d just like to say thank you for having me on your blog and all the lovely things you’ve said about Geekhood.
---
Thanks Andy!  I'm very pleased to hear Archie will be having another geekhood adventure!

You can read my review of Geekhood here

Fab questions and a fab interview :)