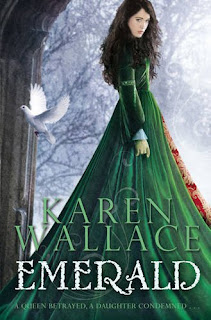 From Goodreads: Emerald St. John is in trouble. She has been condemned to marry a man she hates. Her enemies are conspiring to have her pet bear Molly torn apart in the baiting pits, and the man she loves is far away on the high seas. And she has stumbled into a web of spies with a plot to poison Queen Elizabeth I. To save herself and the kingdom, she must beat the spies at their own game - which means transforming herself from a country girl into a Court lady. Can she do it in time? Set against a detailed and vivid recreation of a great Elizabethan manor house, EMERALD will bring to life a world where the most sophisticated rules of etiquette went hand in with brutality and superstition.

This was such fun to read!  For some reason I don't read much historical fiction but on the basis of this one I really think I should.

I really liked the character Emerald.  She was strong and determined - but also easy to like - and I was glad that she wanted to 'save' herself.  Arabella was a great character too - as much as I wanted to hate her at times I couldn't quite manage it.  And Sarah and Meg proved brilliant additions - and of course I adored Molly the bear!

The romance, I must admit, was very quick to happen.  But I imagine that if I were being forced to marry a man as vile as Lord Suckley I too might fall very quickly for someone as nice as a certain Viscount!  He's a great character - he comes across as  nice and kind but also with an air of intrigue.  A perfect match for Emerald and my only complaint would be that I wish he had been in more of it.

There is a good sense of mystery and twists and turns - something happened that I really didn't expect and that certainly grabbed my attention!  I really enjoyed it and am now looking forward to reading many more books along the same lines.

I really want to read this one!

That's a pretty cover! I remember featuring it as my WoW a few months ago, but I completely forgot about it after that! Thanks for the review, Sammee!

Come on now, the romance was adorable. Think back a few hundred years - there wasn't exactly cinema and a movie dates.
This is a great book to set you off on historical fiction. So what are you going to try next?

By the way, I feel like I haven't seen you in ages. We need to organise a meet up.

I don' read a lot of Historical Fiction either, but this sounds so fun!

Becky - I'm not sure what to try next. Do you have any suggestions?

And yes, we should definitely arrange a meet up - it would be great to see you :)

I am a new author, will you please read my book,"MY LITTLE SECRETS" author Belinda Davis.My book is a love story about the south and I know it will make a great movie! Thank you so much for your time Belinda!

I loved this too
http://bronasbooks.blogspot.com/2011/11/emerald-by-karen-wallace.html