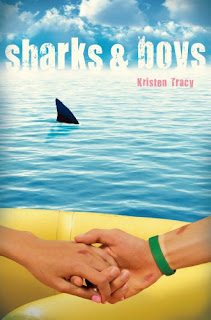 From Goodreads: When 15-year-old Enid Calhoun follows her boyfriend Wick to Maryland for a party, fearful that he might be intending to cheat on her, she finds herself sneaking on board a houseboat where Wick and his friends plan to have a wild night. But before the boys discover their stowaway, a hurricane strikes, and the teenagers are carried miles from the shore and shipwrecked. What follows is a harrowing, yet heartwarming, story of survival, as the teens battle hypothermia, dehydration, man-eating sharks--and along the way, confront their own deepest secrets, including their catalytic roles in the disaster.

This was different from what I was expecting but I did really enjoy it. I really liked Kristen Tracy's writing and I'll be sure to check out more of her work.

The story begins with Enid and her boyfriend Wick 'taking a break'. Convince he will cheat on her she follows him to a party and sneaks on board the boat. When the boat sinks they all find themselves in a world of trouble...

The main character of Enid is where this book was different than I was expecting. She came across as quite lost - she needed constant reassurance from Wick and other people around her. Although you can understand why this might be the case it doesn't stop her action feeling slightly stalkerish when she follows the boys to the party. Many of us may want to follow our boyfriends (or boyfriends we are on a 'break' with) to make sure they are not with anyone else but many of us have too much self esteem to actually go through with it. Or at least I hope we do!

Once the boat sinks though, the story really kicks into action and I have to say I was completely gripped. It actually became quite terrifying and I had no idea if I would get the outcome I hoped. It becomes a story of survival and introspection. Enid starts to realise that she can't hold all boys to the example her father has set - and we get to see she is a lot stronger than I first thought. The girl I met at the beginning of the story was a very different one at the end - and I enjoyed her subtle journey working out what is important and what is not.

Also, I didn't realise the story was going to be focused around 4 sets of twins! I loved that the characters were twins - I have always has a fascination with what that would be like so I found that aspect of the story really interesting.

As I said -  I really liked Kristen Tracy's writing style and I will definitely be checking out more of her books. I have already been recommended Lost It by a friend so I will have to start there.

Another book to add to my wishlist !!

I really wouldn't expect it to be so dark from the cover. I thought it would be a romantic comedy. Sounds frigtening...