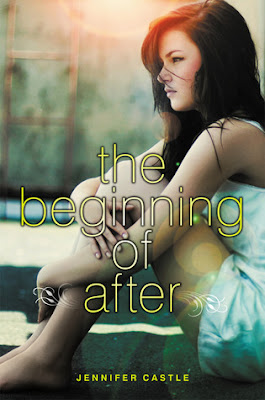 The Beginning of After by Jennifer Castle

From Goodreads:  Sixteen-year-old Laurel's world changes instantly when her parents and brother are killed in a terrible car accident. Behind the wheel is the father of her bad-boy neighbor, David Kaufman, whose mother is also killed. In the aftermath of the tragedy, Laurel navigates a new reality in which she and her best friend grow apart, boys may or may not be approaching her out of pity, overpowering memories lurk everywhere, and Mr. Kaufman is comatose but still very much alive. Through it all, there is David, who swoops in and out of Laurel's life and to whom she finds herself attracted against her better judgment. She will forever be connected to him by their mutual loss, a connection that will change them both in unexpected ways.

Fans of emotionally true and heartfelt stories, such as Sarah Dessen's THE TRUTH ABOUT FOREVER and IF I STAY by Gayle Forman, will fall in love with Jennifer Castle’s incandescent debut novel...a heart wrenching, surprisingly witty testament to how drastically life can change in the span of a single moment.

This sounds soooo good. I saw it featured on The Story Siren's IMM the other week  and it instantly caught my attention.

Email ThisBlogThis!Share to TwitterShare to FacebookShare to Pinterest
Labels: I want to read that..., Jennifer Castle, The Beginning of Atfter

Ooh sounds good! Might have to keep an eye open for that one.

Now I want to read it too. I love IF I Stay, so any books with that feel, really do appeal to me.

Here is what I want to read this Wed. :)

Yup, can't wait for this one. Want it now please.

I haven't heard of it before, but it sounds brilliant.