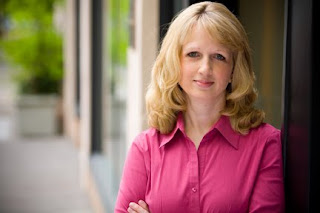 Why I write in verse.

Probably the most common question I get about my books is - why verse? Some people love it. They love how the verse gets to the emotional core of the story. They love the way the story plays out, scene by scene, in the most poetic way possible. Other people don't like it as much. Some miss the beautiful descriptions some books have that fill in details about people, places, and more. Other people have said they think it's a waste of paper to have so few words on them.

When I wrote my first novel, I had a dream about a girl whose boyfriend died, and he loved her so much, he didn't want to leave her, and came back as a ghost. I didn't know a lot of information when I sat down to write. I didn't know how he died. I didn't know what the hauntings would look like. But I knew it wasn't not going to be a scary ghost story as much as it would be a love story.

The story wanted to come out in a sparse, poetic way. I wrote about ten pages and thought - what am I doing? As if selling a novel isn't hard enough, now I'm going to make it harder by writing in this strange format? But I liked what I had so I kept going. I had been a fan of verse novels by authors like Sonya Sones and Ellen Hopkins and Tracie Vaughn Zimmer, but I had never tried to write one.

What I found is that I really enjoyed it. I'm often not good at long, beautiful descriptions. Trying to find a poetic way to describe something, though, that came more easily for me.

So now, I've written four novels in verse (the fourth one is coming out next year called THE DAY BEFORE) and I realize why I like the format for these stories. It creates an atmosphere I can't create with prose. In FAR FROM YOU, the fear Alice felt in the snow and cold was made stronger through the atmosphere of the verse. In CHASING BROOKLYN, two characters are dealing with their grief in their own way, and the verse allowed me to really get at that grief in a unique way, I think.

Not all stories work in verse, however. I'd probably argue, most don't. If you need a lot of dialogue, for example, to tell the story, verse isn't going to work because dialogue that's realistic isn't going to be poetic.

For me, writing a verse novel is no different than writing one written in prose. For other authors, I know it is. They write different poems and move them around, but I write the story from the beginning to end. To me, story is still the most important thing. You have to have an interesting story, or readers will set the book down, regardless of how pretty the verse is. So I work hard on story, and for me, telling a story works best writing it from beginning to end. I usually know a few things about my character and what's happening, and the rest I let play out as I write. I'm very much about discovering things as I write - it keeps it fresh and interesting for me, and hopefully for the reader as well.

To those people who are afraid of verse novels, I hope you'll try one and just see what you think!! I promise, my novels are very accessible - the poetry doesn't make them hard to understand. In fact, they are especially great for teens who don't really like to read, because they move quickly, there are no chapters to wade through, and they often are shorter than regular novels.

Happy reading! And thanks so much for having me here on your blog!

If you missed it yesterday you can check out my 'Guide to Verse Novels: Lisa Schroeder' and my reviews for I Heart You, You Haunt Me, Far From You and Chasing Brooklyn.
Posted by I Want To Read That at 12:00

I can't believe I haven't tried her books yet.

I absolutely adore Lisa Shroeder's verse novels and I love that a new one is out soon! What I love about verse novels is how much emotion can be portrayed through poetry..