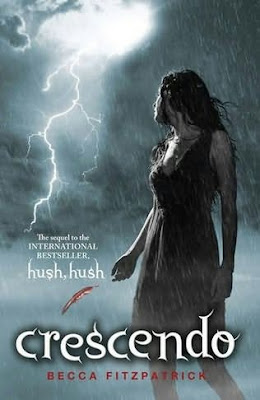 For Review: Simon & Schuster. Published 14 October 2010
From Goodreads:  Nora should have known her life was far from perfect. Despite starting a relationship with her guardian angel, Patch (who, title aside, can be described as anything but angelic), and surviving an attempt on her life, things are not looking up. Patch is starting to pull away, and Nora can't figure out if it's for her best interest or if his interest has shifted to her arch-enemy Marcie Millar. Not to mention that Nora is haunted by images of her father and she becomes obsessed with finding out what really happened to him that night he left for Portland and never came home.

The farther Nora delves into the mystery of her father's death, the more she comes to question if her Nephilim blood line has something to do with it as well as why she seems to be in danger more than the average girl. Since Patch isn't answering her questions and seems to be standing in her way, she has to start finding the answers on her own. Relying too heavily on the fact that she has a guardian angel puts Nora at risk again and again. But can she really count on Patch, or is he hiding secrets darker than she can even imagine?

I have been looking forward to reading Crescendo since the moment I finished the final page of Hush Hush so I think my expectation level for it hit the roof!  Was I disappointed ?  Hell no!

This time the story focuses on Nora and her need to find out what happened to her father. With Patch increasingly absent from her life she decides to find out on her own what really happened the night he died.  But this puts her into serious danger.  And when all the evidence points in a direction she thought was impossible she doesn't know who to turn to...

There were some major revelations in Crescendo.  Most of them I really did not see coming!  Actually, if I'm honest, I didn't see any on them coming and that was brilliant.  I'm pleased with the direction the story has took and am very excited to see where this will all lead.

Patch was absent from the story more than I would have liked.  But I guess absence really does make the heart grow fonder because it wasn't just Nora's pulse that speed up every time Patch was around.  I thought Nora was much stronger this time.   Yes, she make some really stupid decisions, and at times I really wanted to shake some sense into her, but at least she was doing something and not just reacting all the time!  I was glad we got to see more of Vee.  I loved her in Hush Hush and loved her even more here, and I'm also pleased Marcie plays a bigger role here.  I get the impression she's Nora's Achilles heel - which makes some of her more stupid decisions understandable.

The ending?  I loved how the story ended but I'm just starting to get really weary of cliff hangers and this is a major cliff hanger!  It's fine, and works as a great hook for the next book, but it is also really, really annoying when you have to wait a year before you get to read the next one.  It's my only complaint though, even if it did make me want to throw the book across the room.  I think, perhaps, my reaction to it is testament to how absorbed I am in the Patch and Nora's story and that is completely due to Becca Fitzpatrick's talent as an author.  I can't wait for the next book in the series.

Interesting... I didn't like Vee in the first book but I loved her in Crescendo. I like your Marcie prediction... ooh it is exciting, isn't it?! This review has me in love with the book all over again. Go Sammee!

Great review, thanks! I'm coming to the end of this now, really enjoying it!