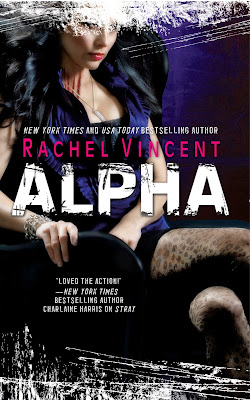 For review: Mira. Published 1 October 2010
From Goodreads: Contains spoliers for previous books
YOU'VE GOT TO HAVE FAYTHE...

The unscrupulous new Council chair has charged Jace, Marc, and me with trespassing, kidnapping, murder, and treason. Yeah, we've been busy. But now it's time to take justice into our own hands. We must avenge my brother's death and carve out the rot at the heart of the Council.

It's not going to be easy, and loss seems unavoidable, but I have promised to protect my Pride, no matter what. With a target on my back and Marc at my side, I'm heading for a final showdown that can--that will--change everything forever. A showdown I'm not sure I'm ready for.

But life never waits until you're ready.

Knowing this was the final book in the series I wanted to devour it and savour it in equal measure.  I had to know what was going to happen, but at the same time I was scared there wouldn't be a happy ending for all the characters I've grown to love.

Like the previous books in the series this one picks up quickly after the events of Shift.  Faythe and her Pride are preparing for the battle of their lives and Faythe still has to make that final decision between Marc and Jace.  When things change for the worse Faythe realises she has to make a stand - to make things right and to carve out a better life for herself and those she loves...

Faythe is and will always be one of my favourite characters.  I love that she's strong, impulsive, fearless and fiercely loyal but mostly I love that she has faults too.  She is far from perfect and makes numerous mistakes - but she cares deeply about the people around her.  And makes us care about them too.  Which makes some of the events in this devastatingly sad.

Considering the events of Prey, I knew that not everyone would still be standing at the end.  I love that Rachel Vincent stayed true to the story and made these decisions, even if it did make me sob my heart out!  It makes the story more believable - and the outcome feels earned.  There are consequences to each characters decisions - especially Faythe's - and sometimes these are not always fair or just.  It great watching Faythe realise that sometimes you have to make the hard decisions and then have the strength to stand by them.  Which leads me nicely to Faythe's complicated love life.  We finally get a decision!.  Although it felt a long time coming I could understand her reluctance in making it - seeing as it meant either Jace or Marc having to leave the Pride.  Others may disagree, but I felt she had already made her choice -  it was just finding the strength to voice it.

It's hard to believe that the events of the six books take place in less than a year.  It brings an amazing sense of urgency to the proceedings and I have to say that I have thoroughly enjoyed the ride.  Everything about this world is brilliantly crafted and I'm not ready to leave it yet.  I really miss it already, and although I agree that Faythe's story has reached it's conclusion, I do hope Rachel Vincent considers a spin off to the series.  There are several characters that could easily hold a series of their own - and I would love updates on how everyone else is doing.

A fantastic book, and an awesome series! .  If you haven't tried it I recommend you do.

Rachel Vincent is the author of Alpha part of her Shifter’s Series about a pride of werecats which is out now from MIRA books £6.99. For more information on Rachel’s books visit  http://www.nocturnebites.co.uk/
Posted by I Want To Read That at 14:00

I had the worst headache EVAH after reading this book because I cried for the last 300 pages NON STOP. love love LOVE IT

Fab review Sammee, I can't believe I missed it when you first posted it LOL. I am still sad that the series has finished even though I was very happy with the conclusion. I hope we do get a spin off series one day :o)