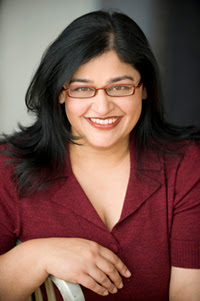 I'm thrilled to be part of Swati Avasthi's Before the Spilt Blog Tour, Swati Avasthi is the author of Split and has organised this month-long blog tour to help raise money for The Family Violence Prevention Fund.

I will and now hand you over to Swati so she can talk about Letting Your Characters Drive.
-----

Letting Your Characters Drive
The hot question in my life as of late seems to be: “Are you a panster or planner?” And I’ve decided, after much thought, that I hate that question. It’s like trying to vote for president: are those my only two options? Really?

The dichotomy implies that the author is either sitting back and controlling the characters like puppets or is sitting down and furiously hitting keys, hoping that a story will take shape.

Campaign Against Planners
Let’s say my protagonist is name Sheila. If I were a planner, I would map out where she would go, do an in-depth outline, construct settings, flow charts, figure out the timing, put everything on a calendar and then, and only then, would the Sheila get to do anything, or say anything. Poor Sheila! She doesn’t get to do anything on her own. She has no choice, no ability to have an insight you haven’t figured out, and most of all, no voice.

And for all that planning, I won’t have a compelling plot because nothing anyone can do on the page will surprise me. And if Sheila can’t surprise me, she won’t be able to surprise my readers.

But what if, instead, I put her in scenes and see what she would do?

Action reveals character. Let your character – her desires, her decisions – be revealed to you through what she wants and what she does to get it, revealed through the writing.

Campaign Against Pansters (and it’s not because I might get pantsed.)
A friend once told me: “I’ve written 16 pages today describing the drive from the ocean house to the coast.” I was stunned into silence. 16 pages of description. That’s an entire short story.

You can’t sacrifice forward movement of the book to writerly indulgences. Not in terms of your readers’ attention and not in terms of your own time. But even more concerning, what if nothing ever happens? What if your characters wander around being nice all the time?

As I said, action reveals character – not what the side of the road looks like.

Now poor Shelia is on a road to nowhere, driving forever with nothing but an endless supply of the gas (i.e. the author’s imagination) and coffee and chocolate bars (what the author is mainlining) and she is still doing nothing.

While I believe that characters should drive, you’d better give them a road map.

Reject the Pantser v. Planner dichotomy. Vote for a Plantser!
Now, I hope I’m not treading on anyone’s process because process is golden and must be respected. However, here’s option three: Be a plantser.

Think of your novel as a three act play. At the end of each act, you hit what is known as a plot point. Plot points are where Sheila’s world changes because her desire changes: it gets remarkable clearer, changes, or refocuses. Now Sheila has the key piece of evidence that will help her solve the case, or something along those lines.

Give your character plot points as if they are destinations that they need to hit on their road trip. (“Shelia, head south. I’ll meet you in Albuquerque in 3 days. How you get there is up to you.”) And when you get to the climax, rip Sheila’s map right out of her hands. What will she do? Where will she go? That’s up to her. Give her a choice and give her a voice.

You’ve taken her far enough. Let her drive the rest of the way

For each comment posted (here and the rest of the tour) Swati is donating $1 per comment to raise money for The Family Violence Prevention Fund. If $250 in comments is reached, she will double her donation to $500!  You can also get involved via the Auction where you can bid on some amazing items including Rosanne Parry's ARC of her upcoming novel, Second Fiddle and Sheila O'Connor's personalized, signed copy of Where No Gods Came.

Split is available to buy from Amazon, The Book Depository, Barnes and Noble and Indie Bound.

Or do you fancy winning a copy of Spilt?   Just fill in the form below for a chance to win a copy. You can get an extra entry if you leave a comment as well!   The deadline is 22 October and the giveaway is open to everyone.  Good luck and thanks for stopping by:)
Contest is now closed and the winner will be notified shortly.
Posted by I Want To Read That at 07:20

Email ThisBlogThis!Share to TwitterShare to FacebookShare to Pinterest
Labels: Before the Split Blog Tour

How wonderful that she's using her blog tour to raise money and awareness for charity!

If I wrote (and I don't), I'd imagine myself as a planner. But can definitely see the benefits of being a planster. :)

Another great guest post Swati! You're great for doing this!!

"Think of your novel as a three act play. At the end of each act, you hit what is known as a plot point. Plot points are where Sheila’s world changes because her desire changes: it gets remarkable clearer, changes, or refocuses. Now Sheila has the key piece of evidence that will help her solve the case, or something along those lines. "

Great tip! I've got it stickied to my computer. I'm not much of a planner (well, ok, I plan and plan and plan just to delay the actual writing, but once I start to write all plans go out the window), but that's an excellent guideline to keep me on track!

Really interesting because I think of myself as a panster but then I do at least have a basic outline of key events. The great thing about writing a load of nonsense first time around is that the second draft is like harvesting in corn. I am basically taking a scithe to my words LOL

Awesome guest post! I think this idea is so fantastic! Go Swati!

I read Split in March and loved it. (I couldn't even wait for the hard copy, so I got the e-book!) I'm so glad that this tour is happening, thanks Swati!

Thanks for the interesting post. I agree with you on most of what you said.