The Clearing by Heather Davis 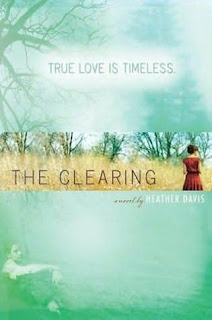 For review: Netgalley. Published April 12th 2010.
From Goodreads: Amy, a sixteen-year-old recovering from an abusive relationship, moves to the country to start a new life with her aunt–all she wants is for everything to be different. In the clearing at the back of Aunt Mae’s property, she makes an amazing discovery—Henry, a boy stuck in the endless summer of 1944. Henry and his world become Amy’s refuge and she begins to learn that some moments are worth savoring. But when the past and present come crashing together, both of them must find the courage to face what is meant to be, even if it means losing each other forever.

This was somewhat different than I expected it to be but in a good way - I really enjoyed it.

Amy was an interesting character. When we first met her we don’t really get a sense of who she is but I think this is because she doesn’t know who she is anymore. Having just come out of an abusive relationship she is not only trying to work out who she should trust she is also trying to work out if she can trust herself. Over the course of the story we get to see her open up – to Mae and Henry - and I found myself really liking her.

I adored Henry. Initially I felt the story would have been better if it had just been from Amy’s point of view to add some mystery to who Henry was but I soon found myself really looking forward to his chapters and his story. He was very kind – a ‘true’ gentleman and just what Amy needed. I definitely felt invested in their romance and looked forward to their scenes together.

Jackson was also a really sweet character and I think he was a great friend to Amy. I really liked him. I wasn’t so sure about Lori but even she had moments. I really loved Mae and thought her relationship with Amy was a high point of the book.

I thought the story ended well – there was just one thing that was left unexplained that I really wanted to know – but other than that I liked how it ended. Having said that I do think it might be the type of ending you are going to either love or hate!

This is definately a book I will be adding to my collection. I really like Davis' writing style and look forward to reading more of her work.

I am so glad you enjoyed it - I've really been looking forward to reading this, and it is nice to know it might just live up to my expectations. Great review!

GREAT review! I love the cover, and it sounds good, although it reminded me of the Time Travelers Wife at first! Definitely gonna be picking it up soon!

I really like the sound of this. It seems a little like The Time Traveller's Wife. Glad you enjoyed it!

Agreed with everything that you said. I really liked this book. Great review!

Great review. I certainly like the sound of the themes in this but I question whether I will like the style. For me this is a maybe.