The Avenger by P C Cast 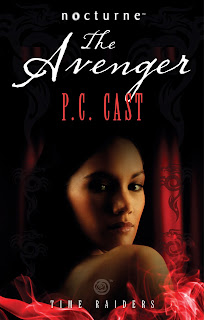 For Alexandra Patton, the Time Raiders project sends the reluctant psychic back to 60 AD Briton—a world where she can barely understand the accents, let alone its culture of brutality and superstition. Armed only with her "freakish" ability to talk to the dead, Alex must use all her gifts to entice Caradoc, a savagely sexy Druid warrior, into helping her succeed in her mission.

What they discover along the way is pure passion.

Now, torn between duty and the man of her dreams, should Alex return home if given the chance? Or dare she risk everything to begin anew in this strange and mystical land?

This was good fun. I thought the book didn’t take itself too seriously and was better for it. I loved the time travel aspect of the story and enjoyed the 60 AD setting. I was fascinated by the history of that period and would definitely be interested in reading more about Boudica. It was much more spiritual than I expected it to be but in a pleasantly surprising way. I enjoyed all the magical aspects and the drawing of power from the land – but some may find too much detail is included as it slowed down the story in some parts. I did find myself really interested in it though.

I also found myself rather taken with Caradoc – the Druid Alex meets in the past. Their story is really sweet and is my favourite aspect of the book. I had a good idea how the story would end but I enjoyed the journey there. In fact I thought it got really exciting towards the end and I raced through the last part of the book.

This is an adult book though so there are a few scenes that would not be appropriate for younger readers. Cast's House of Night series is aimed at older teens and although this is a different kind of story I think those fans will most likely find something to enjoy here too.

As part of the 'Catch five minutes with P C Cast' blog tour I have been given the opportunity to post a letter P C Cast wrote for her readers on the inspiration behind The Avenger. Some of you may have already seen it but for those of you who haven't it is a great story! It will also be included in front of the book.

One of the many reasons I enjoyed writing THE AVENGER so much was that the main setting, ancient Briton, 60 AD, was a serendipitous research coincidence. Sounds weird, huh? Well, here’s what happened: At around the same time I was contacted about being involved in the RomVets Time Raiders project I was working on the first of my HOUSE OF NIGHT young adult books. In the HoN novels there is a school organization called the Dark Daughters, and this group figures predominately in the plot of the series. It’s supposed to be a club led by the best and the brightest of House of Night vampyre fledglings, young women who were being groomed to become High Priestesses of the vampyre goddess, Nyx.

So I needed to have a super cool foundation for the group. I’m of Celtic descent, and have always been fascinated by the history of my ancestors. Because of that I decided to give the Dark Daughters Celtic roots, which meant I needed to research exceptional women in the history of the Celts. That research led me to the Iceni Queen, Boudicca. From the very beginning I was intrigued by her story – that her husband passed the torque of royalty to her at his death, and that she was a well respected leader. Then a Roman tax collector decided to flex his muscle and show Boudicca who was really in charge of the Iceni. He had her publically whipped and ordered her two young daughters raped.

The story intrigued as well as horrified me.

I remember not being able to read fast enough to find out what happened to Boudicca, and cheering as she united the Celts and actually kicked some Roman ass for a while.

History reports what happened to the Queen of the Iceni, and I’ll leave that story to my fictionalized, but basically historical accurate rendering in THE AVENGER. What history isn’t as clear about is what happened to the queen’s two daughters. I decided they disappeared from human history because they were Marked to begin the Change that led them to be powerful vampyre High Priestess, so revered that they began an organization that was to live long after they had passed to their Goddess’s verdant meadows, the Dark Daughters.

And just as I decided that, Lindsay McKenna and Merline Lovelace contacted me with an interesting paranormal romance series idea…where military heroines have to go back in time to retrieve lost pieces of a medallion…to save the world…and out of the historical time period choices I had to send my heroine back to was ancient Briton, 60 AD, and Queen Boudicca.

How could I say anything but yes! Yes! Yes!

Hope you enjoy the ride as much as I did.

House of Night fans will find out more about the origin of the Dark Daughters and Boudicca’s two girls in THE FLEDGING HANDBOOK, an illustrated companion to the House of Night, which will be released early fall of 2010.

Thanks for inviting me to be part of the blog tour:)
Posted by I Want To Read That at 06:00

Ooh, I am looking forward to reading this for sure. I'm interested to see how much more adult this book is. Great review.