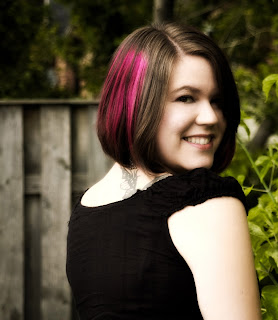 Alyxandra Harvey is the author of My Love Lies Bleeding and Blood Feud - books 1 and 2 of The Drake Chronicles. Alyxandra kindly took the time to answer a few of my questions...

How did you come up with the idea for the Drake Chronicles?
I wanted Snow White with bite!
Solange's story is loosely based on the Snow White legend. In My Love Lies Bleeding there's the seven brothers (instead of dwarves), the huntsman, the heart, the vain queen with her mirror, the kiss... I love fairy tale retellings so I had a blast weaving those details in. The rest of the Drake Chronicles deal with the other Drake brothers and the continuation of Solange's story (and Lucy!). I hadn't planned a series necessarily, but all those yummy brothers became unwieldy! I consider that a very good problem to have.

I love the dual narrative in the books. Did you consciously decide to do this for the series?
Thanks! And yes, because it gave me a certain kind of freedom to explore both sides of Solange's bloodchange: vampire and human. I was able to be in two places at once which you can't do with straight First person POV and it reflects the quick momentum of the plot.

Do you have a favourite Drake (I have a soft spot for Nicholas myself....)?
I don't have a favourite...except for whomever I'm writing about at the moment. It's like ice cream...it's all good!

And a favourite scene?
Today, one of my favourite scenes is the epilogue of book 4, but that won't be out until next year. And I enjoyed exploring aspects of life in Paris during the French Revolution in Blood Feud but I was pretty mean to poor Isabeau so I couldn't say those are favourites exactly. I also like writing from Lucy's point of view, she just takes right over. 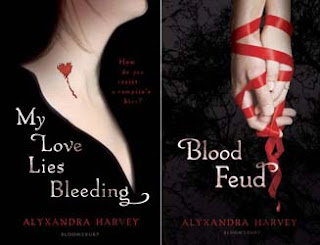 How many books are there planned for the series?
The Drake Chronicles currently has four written and contracted books.
My Love Lies Bleeding Jan 2010
Blood Feud (#2) July 2010
Out for Blood (#3) Nov 2010 UK/Australia, Dec 22 North America
Drake book #4 (untilted) undated/2011
and I'm currently writing book 5. Because I just can't seem to help myself. And I have several spin-off ideas percolating in my head!

What authors/books did you love when you were growing up? Did any of these inspire you to become a writer yourself?
I'm inspired by so many things! Long walks, the forest, rivers, poetry, sari material. I admire Jane Austen, Mary Oliver, Charles De Lint, Tanya Huff, Susanna Kearsley, Patricia McKillip, Holly Black and Joss Whedon. That man can tell a story!

Did you always intend on becoming a writer?
I've consciously wanted to be a writer since I was around nine years old. We were on a family trip and I was bored and bugging everyone and a friend of the family suggested I write a story. I was instantly addicted!

What was the publication process like for you?
Long! I started sending out short stories when I was 15 just to get used to the process. I had some good feedback from Marion Zimmer Bradley for a few short stories, but in the end there wasn't space in that particular Sword and Sorceress anthology. After that, I was published as a poet first, and I still love to write poetry. I would really love to put out a book of poems some day. And I feel very lucky to be working with Bloomsbury to bring the Drake series into the world and three other paranormal YA books (non-vampire). 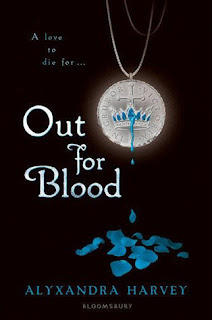 I’m really looking forward to the next in the series. Can you tell us more about it?
Out for Blood is the story of Hunter Wild, a Helios-Ra hunter who makes a brief appearance in Blood Feud. She and Quinn Drake, the wildest of the Drake brothers, work together to fight an unknown evil at the Helios-Ra academy high school even as Quinn tries to save Solange from herself...

Thanks Alyxandra! I can't wait for Hunter and Quinn's story! You can check out the author's website here.

Also, if you haven't read the first installment in the series - My Love Lies Bleeding - you can download it FOR FREE for 24 hours starting at midday on Monday 5th July at the Bloomsbury website. Interested? Just click here.
Posted by I Want To Read That at 11:00

Great interview! I'm glad there's a few more books in the series as I love those Drake brothers!

Fab interview, I'll have to read this now! :)