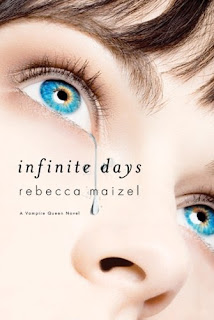 From Goodreads: When Lenah Beaudonte, a 500-year-old vampire queen, wakes up a human teenager at an ultra-cliquey prep school, she must choose between embracing the humanity she’s always craved and saving her new friends from her vicious coven. The first in a sizzling new YA series.

Lenah Beaudonte is, in many ways, your average teen: the new girl at Wickham Boarding School, she struggles to fit in enough to survive and stand out enough to catch the eye of the golden-boy lacrosse captain. But Lenah also just happens to be a recovering five-hundred-year-old vampire queen. After centuries of terrorizing Europe, Lenah is able to realize the dream all vampires have -- to be human again. After performing a dangerous ritual to restore her humanity, Lenah entered a century-long hibernation, leaving behind the wicked coven she ruled over and the eternal love who has helped grant her deep-seated wish.

Until, that is, Lenah draws her first natural breath in centuries at Wickham and rediscovers a human life that bears little resemblance to the one she had known. As if suddenly becoming a teenager weren’t stressful enough, each passing hour brings Lenah closer to the moment when her abandoned coven will open the crypt where she should be sleeping and find her gone. As her borrowed days slip by, Lenah resolves to live her newfound life as fully as she can. But, to do so, she must answer ominous questions: Can an ex-vampire survive in an alien time and place? What can Lenah do to protect her new friends from the bloodthirsty menace about to descend upon them? And how is she ever going to pass her biology midterm?

This one sounds like it could be really good and I LOVE the cover! It's published August 3rd 2010 by St. Martin's Griffin (US)
Posted by I Want To Read That at 19:45

Email ThisBlogThis!Share to TwitterShare to FacebookShare to Pinterest
Labels: I want to read that..., Infinite Days, Rebecca Maizel

I really like the cover of this too. I want eyes that blue!

It certainly has a fun blurb but I'm thinking I've had my fill of vampire books. It would have to be something special to get me to buy it.

I cant wait till this one comes out - I love the cover and the blurb is awesome too! :)

This one sounds fantastic! I really like the cover too. It reminds me of The Tear Collector by Patrick Jones :)