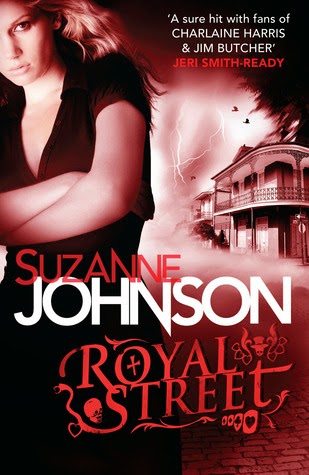 From Goodreads: As the junior wizard sentinel for New Orleans, Drusilla Jaco’s job involves a lot more potion-mixing and pixie-retrieval than sniffing out supernatural bad guys like rogue vampires and lethal were-creatures. DJ's boss and mentor, Gerald St. Simon, is the wizard tasked with protecting the city from anyone or anything that might slip over from the preternatural beyond.

While winds howled and Lake Pontchartrain surged, the borders between the modern city and the Otherworld crumbled. Now, the undead and the restless are roaming the Big Easy, and a serial killer with ties to voodoo is murdering the soldiers sent to help the city recover.

To make it worse, Gerry has gone missing, the wizards’ Elders have assigned a grenade-toting assassin as DJ’s new partner, and undead pirate Jean Lafitte wants to make her walk his plank. The search for Gerry and for the serial killer turns personal when DJ learns the hard way that loyalty requires sacrifice, allies come from the unlikeliest places, and duty mixed with love creates one bitter gumbo.

I liked this one and think it's a good start to a hopefully great series. I liked the characters and DJ's voice. She puts herself in the most ridiculous situations sometimes but I liked her anyway. And I loved the banter between her and Alex! And Alex is seriously hot! And just one of three possible love interests... But definitely my favourite!!! Although I do have a soft spot for Jake too.

The story takes a while to warm up - but I liked the world building and set up for the series. I'm looking forward to reading the next book - hopefully this one will be a bit more action packed - but either way I'm looking forward to more DJ, Alex and Jake. Plus I wouldn't say no to some more of a certain undead pirate...