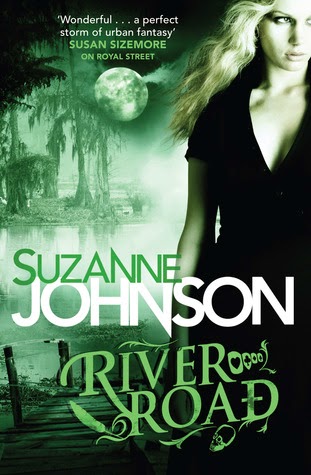 From Goodreads: Hurricane Katrina is long gone, but the preternatural storm rages on in New Orleans. New species from the Beyond moved into Louisiana after the hurricane destroyed the borders between worlds, and it falls to wizard sentinel Drusilla Jaco and her partner, Alex Warin, to keep the preternaturals peaceful and the humans unaware. But a war is brewing between two clans of Cajun merpeople in Plaquemines Parish, and down in the swamp, DJ learns, there’s more stirring than angry mermen and the threat of a were-gator.

Wizards are dying, and something—or someone—from the Beyond is poisoning the waters of the mighty Mississippi, threatening the humans who live and work along the river. DJ and Alex must figure out what unearthly source is contaminating the water and who—or what—is killing the wizards. Is it a malcontented merman, the naughty nymph, or some other critter altogether? After all, DJ’s undead suitor, the pirate Jean Lafitte, knows his way around a body or two.

It’s anything but smooth sailing on the bayou as the Sentinels of New Orleans series continues.

I'm really enjoying this series and it was great to catch up with DJ and Co. I liked that it was set a few years after the first book - it meant that the relationships had move forward more - and I have to say I am actually really enjoying the 3 love interests! Yes I do have my favourite (let's just say I know exactly who I'd like to play ball with...!) but I like the way DJ is conflicted - it makes the whole will they/ won't they thing a bit more interesting. Plus I really like all three.

This outing is much more action packed - I really enjoyed it - plus it was really funny in places too (the pink Gandalf thing? I was crying with laughter!) I also like the way they have both been self contained stories - they were resolved in the end but at the same time I was left wanting more and there were still unanswered questions (yes Rand I'm talking about you!)

Can't wait to read the next in the series!