How to Love by Kate Cotugno 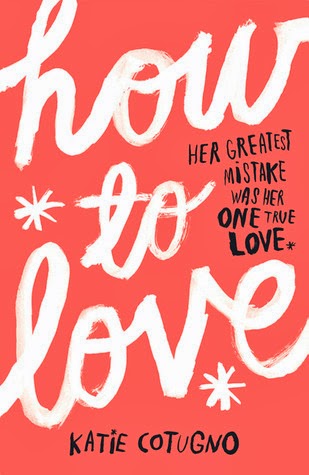 From Goodreads: This is a love story. But it’s not what you think. This is not a first kiss, or a first date. This is not love at first sight. This is a boy and a girl falling in messy, unpredictable, thrilling love. This is the complicated route to happiness that follows.

This is real. This is life. This is how to love.

Reena has loved Sawyer LeGrande for as long as she can remember. But he’s never noticed her, until one day… he does. They fall in messy, complicated love. But then Sawyer disappears from their humid Florida town, leaving a devastated – and pregnant – Reena behind.

Three years later and there’s a new love in Reena’s life: her daughter Hannah. But just as swiftly and suddenly as he disappeared, Sawyer turns up again.

After everything that’s happened, can Reena really let herself love Sawyer again?(less)

Just brilliant! I was completely addicted to this. I loved both the characters – although not the ‘before’ Sawyer quite so much as the ‘after' one. ‘Before' Sawyer was just a little too messed up and he seemed intent on dragging Reena down with him! Yes he had issues and I can understand his downward spiral – I just didn't like the way he seemed to want Reena to do the same. But I loved Reena and how complicated and flawed she was. How flawed they both were – I read so many stories with the perfect character doing the right thing - and while this isn't a bad thing-  it’s great to finally have a story where it’s messy and complicated!

I also loved the way it was written – with the before and after segments. Reena’s relationship with her dad and Soledad. Plus her friendship with Shelbe. I wish she’d treated Aaron better though – I hated her a little bit for that.

Plus I liked the ending. For me – despite what happens next, if it works out or not, Reena finally let someone in! And that, to me, was the point!

Email ThisBlogThis!Share to TwitterShare to FacebookShare to Pinterest
Labels: 4.5 Stars, For Review, How to Love, Katie Cotugno, Reviews