As part of this years World Book Day virtual tour, Will Hill kindly agreed to answer a few questions...
---

Can you tell us about your Department 19 series?

It’s a series about a secret branch of the government who police the supernatural, and try to keep the public safe. A teenage boy called Jamie Carpenter is thrown into their world when his father is killed and his mother is kidnapped, and finds himself in the middle of a conflict that has been gathering for centuries, aided and abetted by a wide array of characters, both good and bad. And in some cases, really, REALLY bad.

The series is inspired by Dracula and Frankenstein, and features some of their characters in new ways, along with a number of real people who populated the nineteenth and twentieth centuries. It’s a tribute to the classic gothic horrors – several chapters are set in the past – while being full of modern weapons and equipment, and spanning the globe. It’s action and adventure and horror, and it features vampires who definitely do not sparkle…

You have contributed to this years WBD App. Can you tell us more about that?

It was a great opportunity to be involved in World Book Day, and to write a Department 19 short story. I’ve always liked writing shorter fiction, and I had been keeping intentionally vague the backstory of Larissa, the vampire teenage girl who is one of the most popular characters in the series, so it seemed like the perfect time to shed a little bit of light on it. It’s what hopefully seems at first like a simple story, of Larissa talking to a teenage girl who has been through a terrible ordeal, that changes into something that is hopefully quite unexpected… 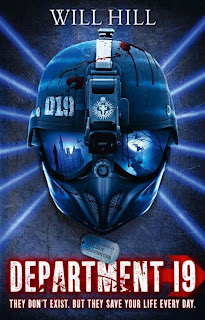 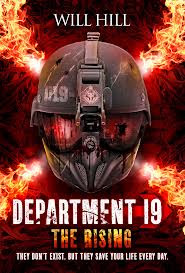 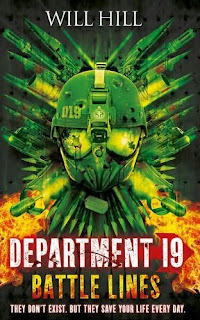 What is a typical writing day like for you? Do you have any ‘must-haves’ before you can sit down and write?

I usually write in the British Library, which is not too far from where I live in London – you can’t take food or drink, or even pens, in there, so any must-haves would have to be left outside!

So – a typical day will see me getting up when my girlfriend (who has a proper job!) leaves for work, and heading into the Library for not long after it opens. I’ll grab a seat in the Rare Books & Music room (I’m very much a creature of habit) and answer some emails, catch up on anything I need to do, then make notes and plan until lunchtime. After lunch I normally start writing, and work until about seven. I try not to work when I get home, but that doesn’t always happen, especially if I’m getting towards the end of a book.

My favourite part is luckily what I get to spend most of my time doing – making things up and writing them down, to quote Neil Gaiman. It’s genuinely exciting when a new idea presents itself and I realise it might be a good one, or when I write a scene and read it through and realise it has done what I wanted it to do. The most challenging is when I get towards the end of a book and realise that if it doesn’t all fit together, if it doesn’t work, that I’m going to have a pretty big problem on my hands.

Do you have any other projects in the pipeline?

I do, but nothing that will see the light of day until the Department 19 series is finished – there are two more books to come, so my first non-D19 book probably won’t be out until 2016. What it will be, I’m not exactly sure just yet – I’ve got an SF horror that I’m really excited about and have started doing some of the planning for, as well as a story about a religious cult that keeps coming back to me time and again…
---

You can check out Will's Blog here.  And the Department 19 series has it's own website here.

For more information about World Book Day and the YA App check out the official website here
Posted by I Want To Read That at 06:00

Oh I LOVE Will Hill!!! Department 19 is one of my fave action series ever!! Thanks for the awesome interview! Can't wait for the rest of the D19 books - and will be looking forward to his new non-D19 books two! :)