Megan Shepherd is the author of The Madman's Daughter. [You can read my review here] She has kindly stopped by to answer a few questions...
---

The Madman’s Daughter is a retelling /re-imagining of HG Wells Island of Dr Moreau. What inspired you to write it?

When I was a teenager, I loved the classics, especially Gothic ones. They’re so full of adventure and romance and mystery. I’ve also always been intrigued by mysterious islands and loved the TV show LOST. My interest in both of those things combined to remind me of The Island of Dr Moreau, and I re-read it for pleasure. As I was reading I was impressed with how relevant the science still was today, and I realized there are no major female characters, so I decided it might be interesting to retell it from a new character’s perspective.

Did you need to do a lot of research?

Unfortunately I’m not well read in history or science, the two topics that required the most research. I had several doctor friends read the manuscript to make sure the medical science sounded accurate (naturally it’s science fiction, so it’s not actual science!). The historical research was fascinating: how corsets worked, the professions available to young single women, sailing schedules, popular piano music at the time. I certainly know a lot more about Victorians and their quirks now!

It’s safe to say the story is rather dark in places! Did you manage to creep yourself out when writing it?

Oh, yes. Absolutely. Most acquaintances know me as a rather optimistic, sweet person. I think they were shocked to read my book! I’m a true animal lover, and I have two cats I adore, so the animal surgery scenes were an enormous emotional challenge. Writing those scenes meant prodding at my greatest fears, but I believe that in order to scare my readers, I have to scare myself, too. 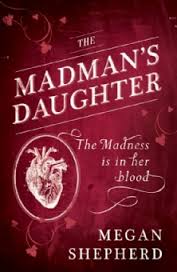 As it is the first book in a planned trilogy can you give us any hints for what to expect in the following books?

Have you always wanted to be a writer?

I only started writing about five years ago. Growing up, my family owned a bookstore, so I’ve always been surrounded by books. Looking back, it seems quite natural that I’d go into writing. But for the longest time I wanted to work overseas with the foreign service. I still love traveling and languages and cultures, but writing is exactly the right job for me.

What has the publication process been like for you?

I wrote three full manuscripts before The Madman’s Daughter, and started another dozen or so. I didn’t query them widely because I knew they weren’t good enough. It wasn’t until I wrote The Madman’s Daughter that I felt confident enough to seek literary representation. Luckily, I got an offer from my agent two days after I queried him! The book sold in the US a few weeks later, and then started selling overseas, and then was optioned for film. It’s been wonderful working with my editor to bring the book into print.

Do you have a typical writing day? Any ‘must haves’ before you can sit down to write?

I like to ease into the writing day. I usually go to the gym in the morning, then have a cup of tea and check email/twitter/social media for a half hour or so, and then dig into writing. I’ll write until six or seven in the evening. Sometimes after that I’ll do some of the business and marketing of the job. The only thing I must have is tea—lots of it!

They are one in the same, I think. I love most the ability to spend my time creating something. My job gives me the freedom to think deeply and dream big, but at the same time, it’s terrifying to stare at an empty page with all my hopes and expectations resting on my shoulders. It’s incredibly challenging to translate the ideas in my head into words on a page.
---
Thanks Megan!

You can check out Megan's website here.
Posted by I Want To Read That at 06:00

Thanks a lot for the interview. I loved The Madman's Daughter and I'm looking forward to the rest. So engaging ;-)

The research paid off-I thought Shepherd did an excellent job with the historical and scientific aspects!

Thanks for the awesome interview guys!! Can't wait to finish the book! :D