Priscilla The Great: Bring The Pain 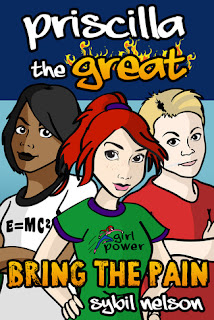 From Goodreads: If you think getting beat up by super-villains hurts, try falling in love! I, Priscilla Sumner, am once again the hottest girl in River’s Bend. It’s good to be back, but things aren’t quite the same. My parents are getting divorced, my boyfriend is keeping secrets from me and Specimen Xi is asking me for relationship advice. Yeah, talk about crazy. And if that wasn’t bad enough, someone has been killing Specimens all around the world. So now it’s up to Tai, Kyle and me to stop them before they get to my family. Whoever it is better watch out, ‘cause we’re about to bring the pain.

This picks up from where we left off in Too Little Too Late. There are consequences from everything that has happened: Priss's parents decide to separate (Priss, Josh and the twins have to decided who to live with) and Priss still blames Josh for what happened to Marco (and yes, I am still in denial!). Deciding to live with her mother, Priss convinces her to return to River's Bend. Back with Tai and Kyle (who is acting rather strange) Priss finds herself facing trouble yet again...

It's nice to be back in River's Bend!. Plus I really missed Kyle in the previous book - I really do like the two of them together. And I liked the fact he get to be the hero for once in this one! I did feel sorry for Josh in this one though. His visions are obviously confusing him and although he tries to talk to Priss she is still mad at him and won't listen.

As for the ending - I loved it (despite being a cliffhanger!) and it really sets up the next book as a must read!