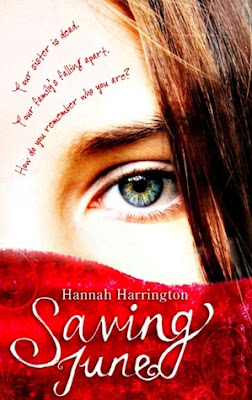 From Goodreads:  ‘If she’d waited less than two weeks, she’d be June who died in June. But I guess my sister didn’t consider that.’

Harper Scott’s older sister has always been the perfect one so when June takes her own life a week before her high school graduation, sixteen-year-old Harper is devastated. Everyone’s sorry, but no one can explain why.

When her divorcing parents decide to split her sister’s ashes into his-and-her urns, Harper takes matters into her own hands. She’ll steal the ashes and drive cross-country with her best friend, Laney, to the one place June always dreamed of going, California.

Enter Jake Tolan. He’s a boy with a bad attitude, a classic-rock obsession and nothing in common with Harper’s sister. But Jake had a connection with June, and when he insists on joining them, Harper’s just desperate enough to let him. With his alternately charming and infuriating demeanour and his belief that music can see you through anything, he might be exactly what she needs.

Except June wasn’t the only one hiding something. Jake’s keeping a secret that has the power to turn Harper’s life upside down again.

I really loved this one.  I thought it was a beautiful story, brilliantly written and I adored the characters.

I loved Harper's voice and it really made the book for me.  Hannah Harrington's writing is really beautiful and it gives Harper a great voice as she narrates the story.  I instantly liked her and could feel everything she was going through.  I really thought the story was a realistic portrayal of grief - there was confusion, anger, sadness - it just felt very realistic.  I couldn't help but be invested in it.

I also really liked her best friend Laney (and her storyline too) and loved Jake.  I also loved him straight away and really enjoyed the way the relationship between him and Harper gently develops (despite not being quite sure about his relationship with June...)  I loved all the music references too - and the way it has such an important role in the story and in their relationship.

Plus road trip!  I don't know why but I love road trip stories.  Maybe because the characters are forced to stay together for long periods of time - I'm not sure - but it definitely works here.

I am honestly super excited to read Hannah Harrington's next novel when it is published.  Saving June has certainly left me with high expectations for it! 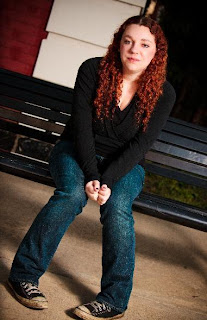 As part of the blog tour for Saving June, Hannah Harrington kindly answered a few of my questions...

What inspired you to write Saving June?

I first had the idea for Saving June while I was in high school. When I was seventeen, I'd lost a relative of mine to suicide and the "splitting the ashes" thing was something that actually happened. The summer after I graduated, I was living out of my car and working as a pizza cook. The radio would always be on in the kitchen, so I was spending a lot of time listening to music and kicking the idea around in my head. A few years later I found some of the bits and pieces I'd written back then, and decided to sit down and write out a full first draft. So some of it comes from my personal experiences, and of course some of it is inspired by music I love. It all ended up tying together!

I loved Harper’s voice. Was she an easy character to write?

I was pretty comfortable writing Harper’s voice. She is sort of similar to how I was at that age, though I don’t think I was ever quite as bitter or brash as she could be during the story. I have a natural tendency toward sarcasm so having her utilize that a lot wasn’t too difficult for me to write. The hardest part with her character was figuring out a way to get her to come out of her shell and really connect with people—especially Jake—without it feeling too forced.

Music plays a large part in Saving June, especially in terms of Harper and Jake’s relationship. Is music something that is important to you?

Absolutely, and especially when I was a teenager. I think some of the music I listened to played a part in shaping my own identity, and it definitely forged some friendships I had back then with other people who either introduced me to music or bonded with me over bands I already loved.

If you could cast Saving June for a movie who would be your ideal cast? And what would you choose as the movie's theme song?

This is a hard one! I think I’d go with “This Time Tomorrow” by the Kinks. It seems to be the most fitting, both lyrically and melodically. I always pictured Johnny Pacar as Jake. I could see someone like Kat Dennings as Harper and Amanda Seyfriend as Laney.

What’s next for you? Are you working on something at the moment?

My next book, SPEECHLESS, will be published by Harlequin Teen at the end of August. It’s the story of a girl named Chelsea Knot, who takes a voluntary oath of silence after her gossip-mongering ways get her in big trouble.
---
Thanks Hannah!

You can find Hannah on her Goodreads and Twitter.
Posted by I Want To Read That at 06:00