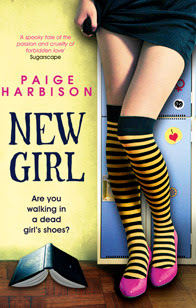 Ever since I arrived at exclusive, prestigious Manderly Academy, that’s who I am. New girl. Unknown. But not unnoticed—because of her.

Becca Normandy—that’s the name on everyone’s lips. The girl whose picture I see everywhere. The girl I can’t compare to. I mean, her going missing is the only reason a spot opened up for me at the academy. And everyone stares at me like it’s my fault.

Except for Max Holloway—the boy whose name shouldn’t be spoken. At least, not by me. Everyone thinks of him as Becca’s boyfriend…but she’s gone, and here I am, replacing her. I wish it were that easy. Sometimes, when I think of Max, I can imagine how Becca’s life was so much better than mine could ever be.

And maybe she’s still out there, waiting to take it back.

Having never read Rebecca I am probably not going to be the best judge on how well this works as a retelling, but what I can tell you is that I really enjoyed reading it.

I loved Harbison's debut, Here Lie's Bridget, when I read it last year and New Girl has all the same elements I enjoyed in it's predecessor.  She  really knows how to get into the heads of her characters, and while I may not always find all of them likeable, they are complex enough that I can't help but want to know more about them.

It took me almost until I was half-way through the novel to realise I did not know the name of New Girl.  In fact, it is not until the very end that we actually learn that particular detail.  But I did really like her and I felt really sorry for her too.  I think even the strongest of people would have found that situation hard to deal with.  But I really liked the fact she learns to stand up for herself.

I really liked Max too.  He seemed sweet and there was just something about him. And I liked the scenes between him and New Girl.  I'm not sure I would have paired him and Becca together though.

Becca was the second narrator of the story (with her parts being told in third person).  She is the character that I found myself disliking but also feeling for.  I love the way the author manages to walk that line between having a character I dislike but one I'm interested in reading about too.  It's as if I couldn't stop myself from reading more about her - even when I had the feeling nothing good was going to happen.

I really liked the ending too.  I wasn't surprised by it necessarily - some things were easy to work out and predict -  but I liked the way it ended for New Girl.

I'm looking forward to whatever Paige Harbison writes next - I'm sure it will be a winner.

As part of the UK blog tour Paige kindly stopped by to answer a few of my questions... What made you decide to write a modern retelling of Rebecca?

Watching Hitchcock movies, remembering about Rebecca, and thinking: a girl is jealous of a girl and it’s fuelled by her interest in a guy? High school! I also wanted to delve into the obsessive compulsion teenagers have when it comes to tragedies involving their peers. If someone goes missing, dies, gets pregnant or anything at all, they obsess.

I loved the dual narration and felt it gave me the opportunity to get to know both characters. Was one easier to write than the other?

I write mean girls like it is my job. And…I guess it is, hah! It’s an odd gift of mine to be able to look into the mind of the irredeemable and understand it. Or maybe I’m just an awful person and all of my books are slightly biographical. =)

Both New Girl and Here Lies Bridget (although I loved Bridget in the end) have some unlikeable, but complex main characters. Do you know what it is that draws you into writing them?

I think everyone has a little B in them. Becca, Bridget, Bitch. They are both messed up people who mess up other people because they can’t figure themselves out. I like writing about them because I think they’re more real than the Good characters. If I don’t even consider myself to be someone who could translate to 100% likeable on paper, how am I supposed to write realistically and try and act like some imaginary character is? Other people can write about the wholly good, noble people. I’ll write about the ones who need to figure it out.

Is there a scene in the book that really stands out for you?

I like the scene after the Halloween ball when new girl falls asleep. She doesn’t know if it’s real or not, and really, neither do I.

What’s next for you? Are you currently working on something at the moment?

I am working on my next book now. I can’t say too much, but that it delves into the friendship between two girls that become driven apart by their own personal fears made worse by a boy and a discovery in a creepy shop.
----
Thanks Paige!  I look forward to reading your next book :D
Posted by I Want To Read That at 06:00

I loved this one too. You should read Rebecca to see how it compares. You never know the name of the narrator in that one at all, so I am glad Paige changed it in this.

Ooh, I didn't know there was a Rebecca YA retelling! I've read Rebecca and LOVED it, mostly because of it's dark themes.

I think I might pick up this one. Great review!