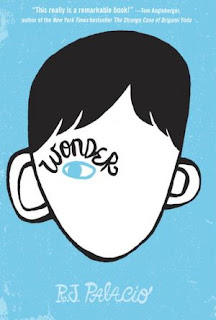 From Goodreads: I won't describe what I look like. Whatever you're thinking, it's probably worse.

August (Auggie) Pullman was born with a facial deformity that prevented him from going to a mainstream school—until now. He's about to start 5th grade at Beecher Prep, and if you've ever been the new kid then you know how hard that can be. The thing is Auggie's just an ordinary kid, with an extraordinary face. But can he convince his new classmates that he's just like them, despite appearances?

R. J. Palacio has written a spare, warm, uplifting story that will have readers laughing one minute and wiping away tears the next. With wonderfully realistic family interactions (flawed, but loving), lively school scenes, and short chapters, Wonder is accessible to readers of all levels.

I completely and utterly fell in love with this book! It's definitely going to be one of my favourite reads of 2012.

Beautifully written I found myself drawn into the story straight away. The voice R J Palacio gives August is truly mesmerising - I couldn't help but love him and the way he sees the world. He could have been completely self pitying but he wasn't at all. He saw things many of us overlook and his story shows us the real meaning of who people are, and how they can be.

I loved the decision to tell the story from different points of view. It really adds to the story and gives us a much bigger insight into Auggie's family and friends. I loved his sister Via - she loves her brother unconditionally and her acceptance that he will (nearly) always come first. Jack Will was a great friend - even if he did make a rather awful mistake - he more than makes up for it. And I adored Summer - she befriends Auggie unquestionably and isn't afraid to stand up for that friendship when she is essentially bullied for it. And seeing Auggie through their eyes - how much respect they have for him and the way he deals with all the negative things in his life - makes his story even more powerful.

I have to say the story really did make me stop and think. It really made me realise how much importance we place on how a person looks. It is almost as if looking good is equated with being a good person and that shouldn't be the case. I don't doubt for one second that many of the horrible reactions depicted in this book have probably happened in real life and it angers me that people can be that cruel. But at the same time I also don't doubt that there are families out there just like Auggie's. Parents who love their children unconditionally, who fiercely protect them and who create a home where their children know how much they are loved.

A truly beautiful, inspirational and heartwarming story. An absolute must read!

This looks amazing! My copy is due to arrive soon, I'm practically standing beside the postbox so that I can get it straight away! :) Great review!

I'm going to have to read this. I hear nothing but great things about it. I'm thinking it would be a good book for our kids book club. Thought-provoking and beautifully written - what more can you ask?! Fab review!

It is such a beautiful book! I loved it too.

I'm so glad this book is getting so much love!

I really can't wait to read this book, fab review :)