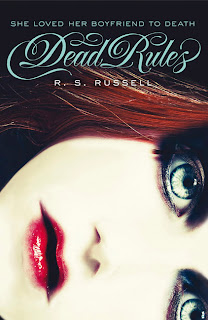 As part of the blog tour for the release of Dead Rules, R S Russell stopped by to talk about ghost encounters...
---

A Whisper Ghost & A Ghost with One Song

When I wrote DEAD RULES, I set out to explore what a ghost encounter with a human might be like from the ghost’s point of view, of what it might be like for a ghost to interact with someone they love, someone as yet very much alive.

I am an academically trained folklorist. I collect true ghost encounters by interviewing people have experienced ghost in their lives. Ghosts are experienced in such a variety of ways, including in dreams, that I often find myself being asked if this experience or that was a ghost experience. I've learned to keep an open mind.

It’s true, I do have the outline of a heart, filled in red, tattooed on my left earlobe. It’s to remind me to listen with and to my heart.

Many ghost hunters don't accept a visit in a dream from a dead person as a ghost encounter. They can't measure it or take its temperature or test it for magnetic-electricity fluctuation, so to them it’s not real. I think these ghost hunters are too quick to judge. They listen to their gadgets, when they should be listening to the beating of a human heart.

I've collected numerous accounts of ghost visits in a dream, of people waking to find a ghost in the room that began as a dream, of messages delivered from the afterlife in a dreams. I am never quick to say that dreaming a ghost isn't real.

I met a young woman a few years after she moved out of her ground-floor college rental following two terrifying weeks of hearing someone whispering her name when she woke up in the morning. An old house nears the local university had been divided into two apartments downstairs.

She said she felt as if she were being softly touched... and it was this touching that woke her. Then she heard the voice. It was voice filled with malevolence. She said she felt molested simply by hearing her name being whispered close to her ear. She had never experienced anything similar before moving in or has since leaving the rental. She told me that even driving on the street where the old house is located still fills her with a sense of ominous dread.

Do you believe this is a true ghost experience?

Dave, a man in his forties, waited at library event to tell me his encounter once everyone else had gone. Over the years, I have learned that when adult males attend my little ghost events alone, they (usually) want to talk to me. Dave said he was raised in a musical family. His parents, aunts and uncles, siblings and cousins, all performed music publicly as regularly as most people eat toast.

The oddity among his family, Dave never took to music. Or vice versa. He could pick a little guitar, but it never really interested him and he had set it aside, he said, for many years. When his mother died, he got out his guitar and decided to learn to play her favorite song.

The song was difficult for Dave. He got most of it down, but there was one part of that song he just couldn't get right. He would go to bed at night with the guitar propped in the corner of bedroom. And the next day, every day, he would try again. Dave longed to play the entire piece of music from beginning to end as a tribute to his mother.

I sat across from Dave in a folding chair as he told me the rest of his story, his eyes occasionally dampened by emotion.

"I never told anyone this," he said. "I was wondering, though, do you think that was her ghost in my dream?"

You can check out the author's website here, and there is an extract below!   Enjoy:)
Posted by I Want To Read That at 06:00